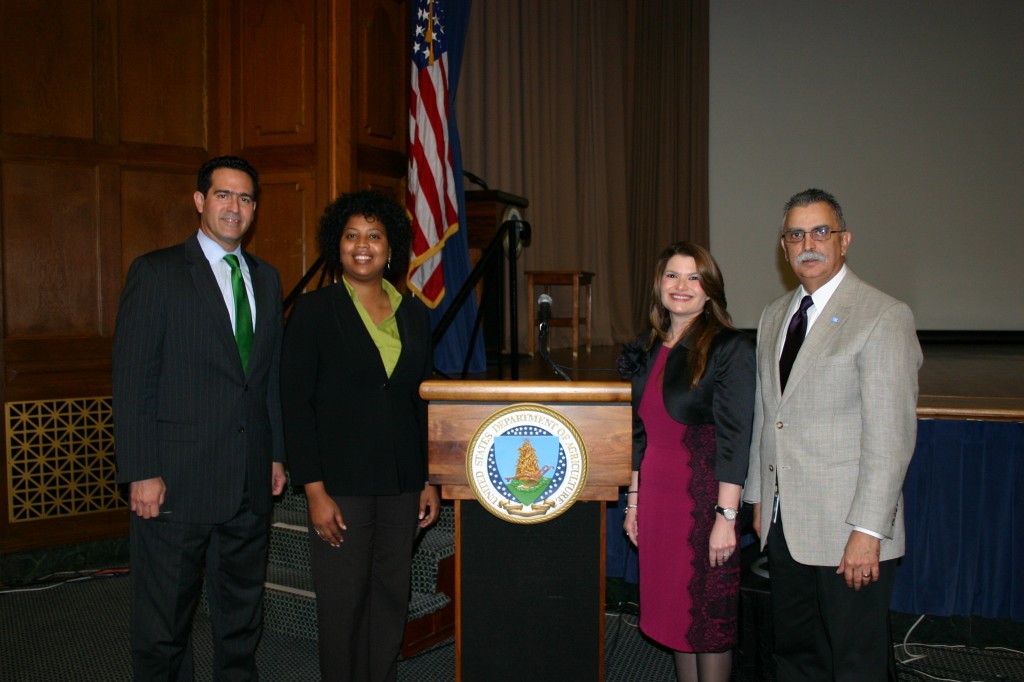 Each had a different story. A different background and a different experience. But they all represented Hispanic America and they all shared their history and culture with the Farm Service Agency during a Town Hall Meeting celebrating National Hispanic Heritage Month.

“I have firsthand experience when I say that the work that we do in FSA has been viable to the sustainability of Hispanic farmers like my father and many others throughout the nation,” said FSA Administrator Juan Garcia, who is the first Hispanic selected to the administrator position.

Garcia said his father farmed cotton and grain sorghum and got his start with a loan from FSA, then known as the Farmers Home Administration.  His family later benefited from the guaranteed loan program as well as other support programs offered by the agency. “After today I hope you have an appreciation for the past, present and future of agriculture for Hispanics, but also know how you and your work have contributed to Hispanics which makes up a small part of our nations’ mosaic of different cultures.”

Following this year’s theme, “Many Backgrounds, Many Stories…One American Spirit,” Garcia was one of four Hispanic FSA employees who shared their personal experiences during the event held Oct. 3 in the Jefferson Auditorium at the USDA headquarters in Washington, D.C.

Vilma Alejandro, a Panamanian-American and associate director for Farm and Foreign Agriculture Services Human Resources Division, asked the audience to imagine a workplace in which everyone looks the same, sounds the same, acts the same, talks the same, feels the same and thinks the same.

“Is this a workplace where employees can get excited?” she asked. “I want to inspire you. I want you to understand that diversity means you. It includes you,” she said, adding that she is a living testimony to all Latinos that Hispanics can break through the glass ceilings and that FSA has started its journey to becoming a model of diversity and inclusiveness at all levels.

For Deputy Chief of the Public Affairs Branch Isabel Benemelis, speaking Spanish was seen as a disadvantage when she came to the United States from Cuba. Often teased at school because she couldn’t speak English, today Benemelis said she is very proud that she is bilingual.

“Being bilingual is one of my unique talents; it has helped me as I began my career in television and radio production and continues to be one of the important tools in my belt now.  It gives me great satisfaction that today I’m able to help Hispanic farmers and ranchers by providing information in Spanish on FSA loans and programs as they strive to learn English like I once did,” she said.

But like many other Hispanics, Benemelis said she wants to be valued for more than her bilingual skills.

“Latinos bring much more to the table than just burritos, salsa and mojitos. Hispanics enrich our culture, help build our cities, grow our economy and play a major role in defending our nation.”

José Gonzalez, director for FSA Commodity Operations Division has a similar viewpoint. Gonzalez said being Hispanic connects him to a large part of FSA customers in ways that non-Hispanic employees cannot connect and having a diverse workforce helps organizations better face unique challenges.

“If we would like for USDA to be considered a high-performance organization then as employees, supervisors, managers and senior executives, we must continue to maintain diversity as a core value to ensure the people hired and trained to work for USDA reflect all the people we serve.”National Hispanic Awareness Month is celebrated Sept. 15-Oct. 15 and pays tribute to generations of Hispanic American who have influenced and enriched the nation.

This entry was posted in Features and tagged FSA, USDA. Bookmark the permalink.

One Response to Celebrating Hispanic-Americans: Many Backgrounds, Many Stories…One American Spirit