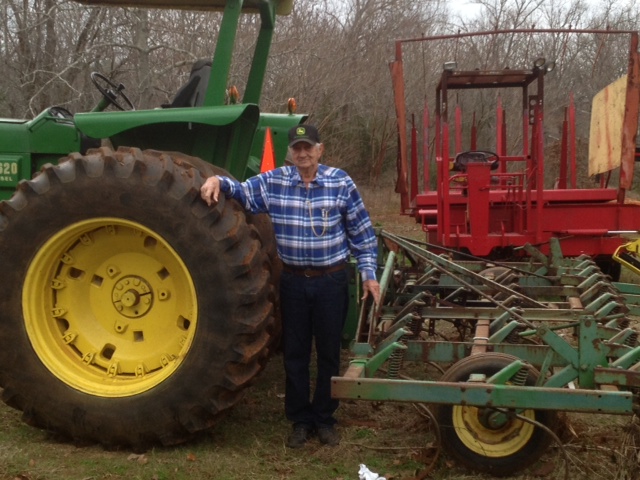 John Lee Meyer took advantaged of the new FSA Microloan program that focuses on small and beginning farmers by easing some requirements and offering less paperwork.

John Lee Meyer applied for his first loan with the Smith County Farm Service Agency (FSA) in Texas to purchase a John Deere 2750 tractor with cab for his hay operation. Meyer owns a small horse hay operation in Palestine, Texas. He runs his own equipment and cuts, rakes and bales hay on 68 acres.

Meyer’s loan application began as a direct farm operating loan, but quickly changed to a Microloan shortly after the new program was announced in January.

The new FSA Microloan program features a simpler application process requiring less paperwork than traditional operating loans. The requirement for managerial experience and loan security has been modified to ensure that small family operations and beginning farmers and ranchers can obtain the credit needed to start, continue, enhance or expand an agricultural operation.

Eligible applicants can apply for a maximum amount of $35,000 to pay for initial start-up expenses such as hoop houses to extend the growing season, essential tools, irrigation, delivery vehicles, and annual expenses such as seed, fertilizer, utilities, land rents, marketing, and distribution expenses.

“From my perspective, the Microloan program will be easier and not so intimidating for producers,” said Grier. “It will provide easier access to capital for eligible applicants who want to get involved in agriculture in some form or fashion.”

After retiring, Meyer decided to switch from a row-crop to a hay operation because he believes there is more money in the hay business.

Meyer’s Microloan was approved and he is sure to see some changes in productivity and efficiency. He is the first to admit that the weather can be hard on him and limits the amount of time he can spend in the field. His new tractor will have an air-conditioned cab that will allow him to work through Texas’ notoriously unpredictable weather and heat.

“I used to wait until after 3:00 PM to get on the tractor because it was so hot outside,” said Meyer. “Owning a tractor with a cab will allow me to work longer hours even when it’s hot or cold outside.”

His new tractor will especially come in handy next year when he expands his hay operation to 200 acres.

Meyer sells his square bales to an established customer base of horse owners for $4 a bale. The drought adversely impacted his hay operation the past few years; fortunately, he got by unscathed last year. Unlike many hay producers, Meyer did not raise his hay prices during the drought. Despite the high demand for hay in many drought-stricken states, he left his hay prices at $4 a bale.

Meyer gets his business sense from Henry Ford, founder of Ford Motor Company and Sam Walton, founder of Wal-Mart. He believes in keeping his price lower than the competitor’s price.

While this was Meyer’s first time to work with FSA, he said he would look into using another FSA loan when he starts operating on a larger scale.