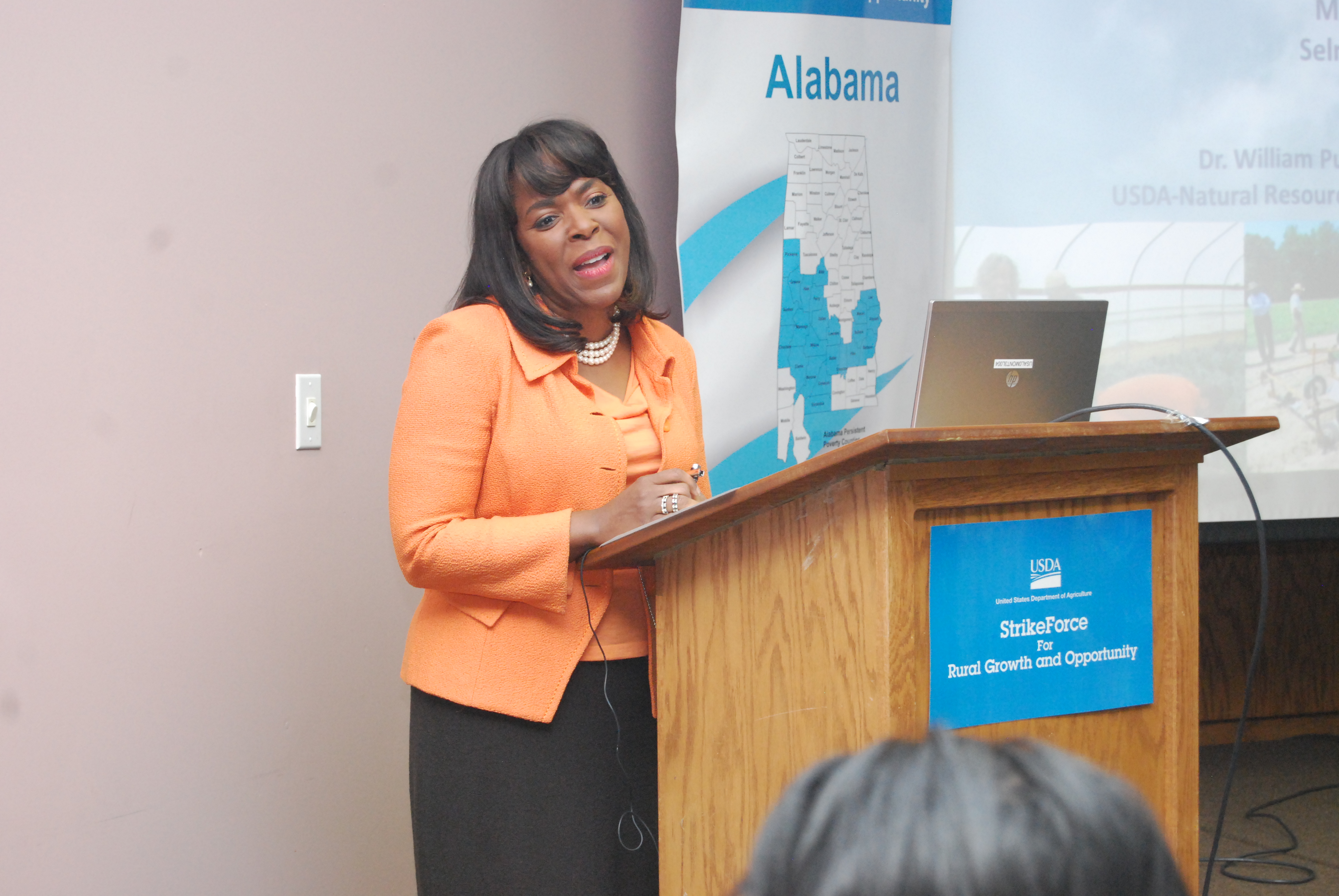 Rep. Terry A. Sewell address attendees during a StrikeForce meeting held in Alabama.

U.S. Representative Terri Sewell (D-Ala.),  joined USDA agency leaders and others at a meeting of the StrikeForce for Rural Growth and Opportunity in Alabama this month.

Approximately 90 citizens and community-based organization representatives participated in a StrikeForce informational meeting held at the Central Farmers Co-op in Selma, Ala.  Currently, 90 percent of America’s persistent poverty counties are in rural America.  The primary goal of the StrikeForce initiative is to partner with local and state governments and community-based organizations on projects that promote economic development and job creation in rural communities.

“We take very seriously the opportunity to improve the Black Belt for future generations,” said Sewell about the importance of StrikeForce in the Black Belt Region. Sewell represents the 7th Congressional District and served as guest speaker during the meeting. She stated that resources like StrikeForce is what’s needed to provide opportunities in the state.

Comments also were made by Tammy Gray-Steele, executive director of the National Women in Ag Association, as well as USDA representatives.

“Our intent with the informational meetings is to inform state agencies, community based organizations and agricultural partners about our goals for StrikeForce in Alabama, as well as the importance of working collaboratively with them to make the StrikeForce initiative in Alabama a success,” said FSA State Executive Director Daniel Robinson.  “We look forward to increasing partnerships with rural communities and leveraging community resources in targeted, persistent poverty areas in an effort to help rebuild and revitalize rural communities.”

U. S. Department of Agriculture Secretary Tom Vilsack started the “StrikeForce” initiative as a pilot project in 2010 in three States: Arkansas, Georgia, and Mississippi.  In 2011, it was expanded to include Colorado, New Mexico, and Nevada.  In 2013, Secretary Vilsack announced new efforts to bring the StrikeForce for Rural Growth and Opportunity to Alabama, Alaska, Arizona, North Carolina, North Dakota, South Carolina, South Dakota, Texas, Utah, and Virginia.

Through the StrikeForce Initiative, the Alabama StrikeForce team will focus on helping to improve quality of life in 23 persistent poverty counties in Alabama.

This entry was posted in Features and tagged farmers, FSA, StrikeForce, USDA. Bookmark the permalink.