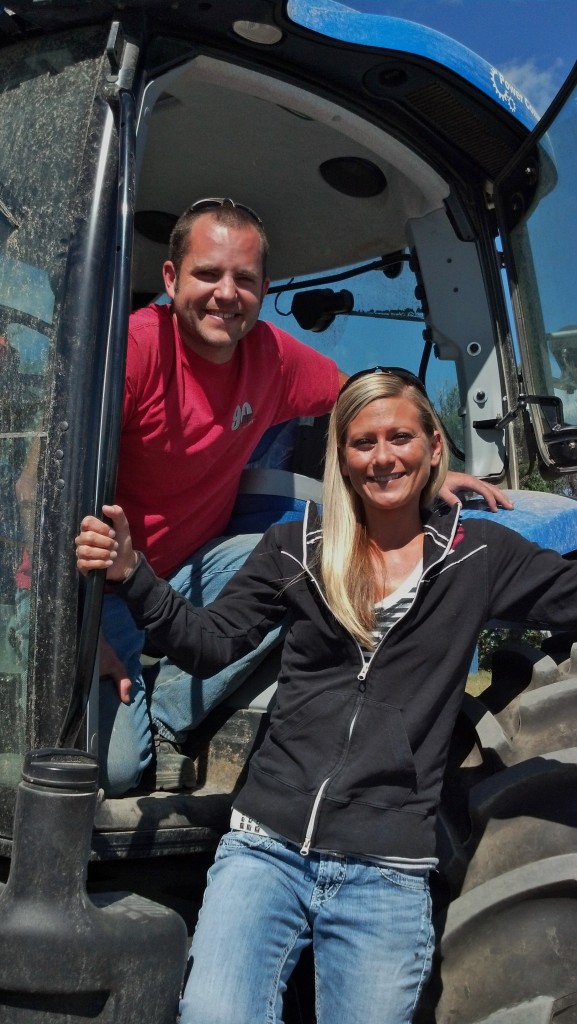 Eric and Allison are third generation farmers who used an FSA Operating Loan to take the business to the next level.

When Eric Johnson finished high school, he didn’t see cows in his future.

“I wanted a new adventure and I wanted to try something different after being on the farm my whole life,” said Eric. “I tried carpentry and later worked at a nursery as a landscaper laying paver patios and building rock walls.”

Landscaping didn’t employ year-round so he began work at a large dairy.  This is also how he met his wife Alison. “I enjoyed my work on the dairy farm and that’s when I realized I missed working on the farm where I grew up,” said Eric.

Several years later, his dad, Harold, needed a new herd manager and offered Eric the job.  He jumped at the chance.

Since coming back to the farm, Eric and Alison, have taken over the farm and continue as third generation owners and operators of the Johnson Family Farm that has been milking cows in southern Meeker County, Minnesota, since 1925.

But Eric’s dad didn’t just hand over the business.  He made him earn it.

“About three years ago I was working as herd manager and my father offered to sell the cows to Alison and me,” said Eric. “So we purchased around 160 dairy cows as well as some additional cows from other parties using a Farm Service Agency Operating Loan.”

This loan allowed the Johnsons to purchase the cows with a low interest rate and longer terms than conventional credit. Young stock were purchased and financed through Eric’s parents and Eric and Alison began leasing the family facilities.

Today, the operation is thriving.  Dairy cow numbers are around 260 with about 250 replacement heifers on hand.  Production is now near 21,000 pounds.

“Our focus has been more on milk quality improvement and herd health instead of milk production increase,” said Eric. They are making great progress in that area and the state of Minnesota is taking notice, listing them for the first time on the Top 100 Minnesota dairy farms, sponsored by the Minnesota Department of Agriculture.

“Eric and Alison are a prime example of some of the excellent producers who got started with FSA,” said Jen Robinson, the Farm Loan Officer who assisted the couple with a loan. “Their hard work and savvy decision making, coupled with FSA’s rates and terms, embody the success story FSA works hard to achieve.”

Eric and Alison no longer rent the facilities, but purchased the family farm from Eric’s parents and paid off the heifers and have almost paid off the cows.

“FSA helped us with purchasing the cows, by making it possible for a young couple, with hardly any assets, to get a loan to better ourselves and make us a success today,” said Alison.  “I personally like the fact that FSA likes us to have a detailed account on everything.  It makes my job as bookkeeper easier.”

This entry was posted in Features and tagged beginning farmers, farm loans, FSA. Bookmark the permalink.

6 Responses to FSA Keeps Third Generation in the Dairy Business