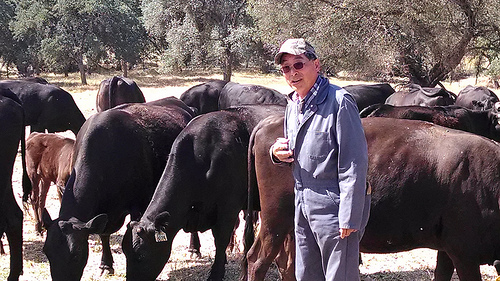 Not even a three year drought weakens Glenn Nakagawa’s resolve or determination to maintain his herd and protect the unique genetics of his American Wagyu cattle.

The Nakagawa Ranch (Valley Springs, Calif.), owned and operated by Glenn and Keiko Nakagawa, is a cattle operation steeped in history and tradition. The Nakagawas raise American Wagyu (Wa = Japanese and, Gyu= Cow) cattle, originating in Japan, but bred today in the U.S. for their excellent meat quality and calving ease.

Nakagawa is a third generation rancher who owns and works the same ground his grandfather, an immigrant from Hiroshima, Japan purchased two days before Pearl Harbor — an event that would force the entire Nakagawa family into internment camps until 1946 when they were able to return home to the ranch.

If anything, the Nakagawas are resilient; a trait that has served them well in the agriculture industry and particularly the past three years of below normal rainfall during California’s most severe drought in decades.

“I’ve been through many natural disasters — hail, flood and drought — times where I would have to stand on the sidelines with nothing to sell only to have to crawl on my hands and knees to the bank to secure an operating loan so I could stay afloat,” said Nakagawa. “But this time is different thanks to the availability of livestock disaster assistance program.”

According to Nakagawa, USDA Farm Service Agency’s Livestock Forage Disaster Assistance Program (LFP), authorized in the 2014 Farm Bill, has enabled him to maintain his original herd of 70 cow/calf pairs and four herd sires.

Maintaining the “original herd” means maintaining herd genetics which is imperative for the Nakagawas’ Wagyu breed because Japan has banned the export of Wagyu cattle, including breeding stock, declaring the breed a national living treasure. As a result of this ban, all of the American Wagyu today, including the Nakagawa’s cattle, are descendants of just 500 head of imported Japanese Wagyu.

But maintaining the herd means you have to be able to feed them. Prior to the onset of the drought in 2012, Nakagawa had nearly 600 acres for grazing and could run one cow/calf pair per ten acres but in the spring of 2013, Nakagawa lost the lease on 225 acres because the lessor needed the grass for his own cattle. This loss of acreage reduced Nakagawa’s stocking rate to one cow/calf pair per five acres and forced him to purchase supplemental hay that was hard to come by and extraordinarily expensive to haul from as far away as Oregon.

“I started in agriculture raising plant crops and if you lost a tree or a vine, well, you just said, ‘oh well,’ disked them up and planted another,” said Nakagawa. “But with these cattle, when you have a starving or dead cow, it’s like family, you’re emotionally attached.”

Nakagawa credits LFP program benefits for enabling him to persevere through this epic drought with his herd healthy and intact, his genetics protected and calves available for the market place without having to go to the bank to secure a loan and incur debt.

Since disaster assistance sign-up began, USDA has received more than 112,746 applications. As of June 5, 2014, USDA has paid more than $506 million to help American farmers, ranchers and their families devastated by severe losses. Producers impacted by drought, snowstorms and other unforeseen weather events should contact their FSA county office to make an appointment and learn if they are eligible for disaster assistance.

This entry was posted in Features and tagged disaster, disaster assistance, drought, LFP. Bookmark the permalink.