Drought Assistance Helps Nebraska Rancher Get Back on Track 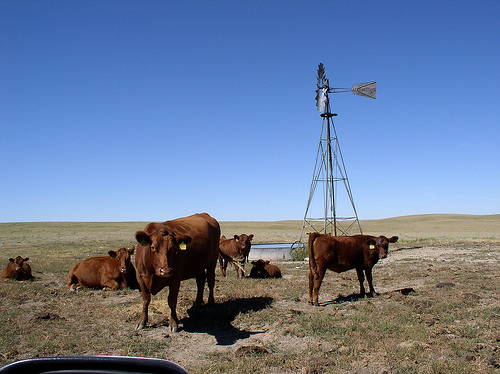 Like many ranchers suffering from the effects of drought, LaNelle Martin paid $5,000 more for high-priced hay and feed to keep her small operation running.

When enrollment opened for the USDA disaster assistance programs this April, LaNelle Martin was one of the first to sign up at the Kimball County FSA office in Nebraska.

“After two years of a severe drought our pastures are limited and haven’t grown,” said Martin. “We need the pasture to support our cattle and the cost of feed and hay is pricey.”

Nebraska, along with portions of the southern and western parts of the United States has suffered one of the longest and most devastating droughts in history. Kimball County’s worst seasons were 2012 to 2013, when the area was named a primary natural disaster area by Agriculture Secretary Tom Vilsack. This year, some snow and spring rains provided a little relief, “But as most of our producers say, we are only four to six weeks away from another disaster,” said Patricia Perry, FSA program technician in the Kimball County office.

Perry helped Martin enroll in the Livestock Forage Disaster Program (LFP), one of several disaster programs that opened for enrollment in April following the passage of the 2014 Farm Bill. LFP compensates producers for grazing losses, which is the lifeline of Martin’s operation.

For two years she paid nearly $5,000 more for 50 tons of hay and feed. She also utilized Conservation Reserve Program (CRP) land for grazing to keep the herd fed. Generally, land enrolled in CRP is left untouched for several years to protect the nation’s natural resources, but the U.S. Department of Agriculture made exceptions in drought-stricken areas to provide relief to ranchers.

“The assistance has been a help for cash flow and to get back on track,” said Martin who, along with her husband Dan, has been farming for about 10 years. “It gives us an opportunity to move ahead instead of feeling like we are behind.”

The couple is living out their ranching dreams with 640 acres of pasture and 40 cows. By Nebraska standards, that’s a small operation, but they are determined to make it work.

“We’ve been married for 30 years and this is something we have wanted to do since we were younger, but it was difficult to get into it,” said Martin. “When we had an opportunity we decided to buy a place. It’s a lot of work but it is very fulfilling.”

Since disaster assistance sign-up began, USDA has received more than 94,500 applications. As of May 29, USDA has paid more than $342 million to help American farmers, ranchers and their families devastated by severe losses. Producers impacted by drought, snowstorms and other unforeseen weather events should contact their FSA county office to make an appointment and learn if they are eligible for disaster assistance.

This entry was posted in Features and tagged disaster, disaster assistance, drought, FSA. Bookmark the permalink.