Pitching Aquaculture and Microloans Is a Marine Veteran’s New Mission 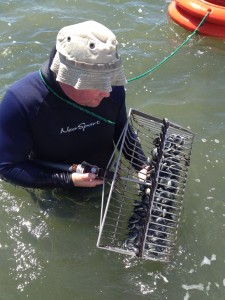 Raising clams has always been a part of Michael McCarthy’s life — until Sept. 11, 2001.

“That was my motivation,” said McCarthy, who was working with the New York/New Jersey Harbor relay program, purging and harvesting clams, when terrorists crashed two airplanes into the World Trade Center. “You could look across the water and see the Towers. We were shut down for a couple of weeks and that’s when I decided to join the Marines.”

Wanting to do his part, Michael enlisted in the United States Marine Corps. “I knew I wasn’t going to do it for the rest of my life, but I felt like I did something to help a little bit.”

That’s the same commitment McCarthy made following an honorable discharge from service. He returned to New Jersey and reconnected with the clam industry he has loved since he was 5 years old. But this time it was a lot different.  As a returning veteran, working in the industry became more than just a job during high school or a means to earn money during college summer break. This time, he was going to do it on his own.

It took a few years, but by 2008, McCarthy oversaw millions of seeded clams on his own bed space while being mentored by the owner of Bayfarm Inc., an industry seed supplier and known advocate for conservation in Barnegat Bay. He took that knowledge and became active in improving the health and status of the New Jersey Shellfish Industry, while continuously expanding his own operation.

It was at this time, McCarthy learned about the Farm Service Agency’s microloan program through interactions with Gef Flimlin, Rutgers Marine Extension Agent.

Loan Officer and Loan Outreach Coordinator Matthew Pavone credits the relationship between the Rutgers Extension and FSA for bridging this veteran to the USDA. Pavone says, “prior outreach, especially following Hurricane Sandy, focused on affected areas along the New Jersey coastline where aquaculture is prevalent.  The initiative promoted benefits and services offered by USDA, including the microloan program.”

At that time, McCarthy’s business was well established with two acres of water area. “It was clear that Michael was serious, experienced, and knowledgeable about shellfish and Michael required investment capital to support the next stage of growth for his small business,” Pavone stated.  The microloan helped him purchase a custom built packline that counts and separates clams by size. The microloan also helped him purchase screen cover material that allowed him to expand inventory across more acreage and protect the clams.

“[The microloan] is helping me become more efficient. I’m building my business and I’m almost where I want to be,” said McCarthy.

In his downtime, McCarthy has become a spokesperson for the clam industry. When Superstorm Sandy struck the New Jersey coast, the clamming industry went into a tailspin. People didn’t trust that the clams were safe to eat. McCarthy made it his mission to write articles for the local newspaper conduct interviews and educate the public about the safety of the clams.

“Wherever I go, I make an effort to try and get more consumer acceptance,” said McCarthy. “I’ve had pretty good success so far.”