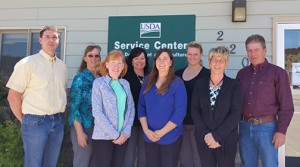 Sturgis, S.D. — According to Jim Neill, Meade County Farm Service Agency (FSA) Executive Director, everyone in the county office had “dreams about livestock applications” following Winter Storm Atlas. The sudden 2013 blizzard dropped up to three feet of snow in parts of South Dakota.

It caught ranchers off guard. Their cattle roamed prairieland, rummaging sparse forage for food after the harsh drought of 2012. The storm trapped the livestock in the cold, covered their food and caused 20,000 head to succumb in Meade County alone. Throughout South Dakota, 45,000 head of cattle died. It was a shocking disaster.

Jim Neill is one who stepped up. His entire team in the Meade County FSA office did.

“The staff did a great job,” Neill said. He explained that his program technicians are friends and neighbors to the hundreds of ranchers who suffered catastrophic losses. They worked tirelessly to help their county producers, he said.

Neill also credits his county committee for their compassionate work. They met 8-10 hours each week following the disaster to go through dozens of applications streaming into his office.

But temporary program technician Holly Howie saw in Neill an unsung hero as he led the effort. “He is a very hard worker, very involved with the community,” Howie said. “Jim works above and beyond doing what it takes to help the producers.”

Howie said she felt like Jim Neill would be “a great candidate” for the government’s Unsung Hero competition. She nominated her boss and he was selected.

Howie and Neill share a passion. They love family. Howie, 30, is the mother of three youngsters. She and her husband had only recently moved the family to the Sturgis area from another part of the state where she had been a full-time FSA program technician. Neill is the father of five – two boys and three girls. They had moved to Sturgis in 2010.

It’s hard to imagine that Neill has much time to spend with his five children. One weekend a month he devotes to his National Guard duties.  Two weeks a year he spends training with his guard unit, a natural activity for the former military leader. But he does find time for his kids, helping them with baseball and softball.

There was pride in his voice. A good dad, you can tell.

A good FSA employee, too. He said he was humbled by a phone call he received from FSA Deputy Administrator for Field Operations Greg Diephouse, who offered his congratulations for Neill’s selection.

Neill said accepting praise is not one of his stronger suits. Still, he said, “It was nice to have someone say thanks. It was a nice honor.”

Praise came from FSA Administrator Val Dolcini, too: “Jim represents the kind of ‘can do’ spirit that exemplifies the employees of FSA. I’m proud to call him my colleague.”

So, why all the fuss over Jim Neill and the Meade County staff? Because 500 producers in Meade County, South Dakota, suffered devastating losses eye-witnessed by USDA Under Secretary Michael Scuse. The disaster happened at a time when government programs were shut down as a result of an expired farm bill.

Jim Neill and his staff supported efforts to raise funds within the community. They found temporary solutions until the 2014 Farm Bill came up with relief. That was more than a year after the losses.  Since then, $32 million in disaster relief payments have reached the producers in South Dakota, in good part thanks to the work of Neill and his staff.

Individuals with unsung natural leadership capabilities, capabilities exemplified by Jim Neill, are the ones who generate heroic results. Something we see often at FSA.

So, in honor of all of FSA’s unsung heroes, we say congratulations to Jim Neill. For more information on USDA’s 12 Unsung Heroes, visit http://blogs.usda.gov/2015/05/06/usda-celebrates-the-public-service-of-12-unsung-heroes/.