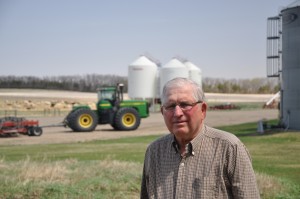 In addition to celebrating its 30th anniversary, the Conservation Reserve Program (CRP), administered by the U.S. Department of Agriculture (USDA), also recently observed 1 million acres enrolled in a subset of the program which protects wildlife, with the milestone occurring in the State of North Dakota.

Harry Schlenker began farming in LaMoure County in 1955, purchasing land the following year.  During the 60 years he has farmed, his operation has evolved from harvesting barley with a 10-foot-wide binder to a 100-head cow-calf livestock operation with one of his four children.

During the thirty year lifespan of CRP, Schlenker has been an avid supporter. “I’ve always believed in the CRP program, it’s a good investment, it’s good for the soil, it’s good for the country,” said Schlenker.  He has tried to keep at least ten percent of his farm enrolled in CRP at any given time, and planned to reenroll land that was set to expire in 2014.

CRP provides incentives to agricultural producers so that certain environmentally sensitive land is not farmed or ranched, but instead is planted with long-term plant species, such as approved grasses or trees, to prevent soil erosion and improve water quality. In return, the USDA Farm Service Agency (FSA) provides the farmland owners with rental payments and cost-share assistance for periods ranging from 10 to 15 years.

Under CRP continuous authority, land may be enrolled at any time.  When Schlenker contacted the USDA FSA county office, however, he found out that there were no remaining available acres for continuous CRP.

So when an offshoot of CRP became available, known as the State Acres for Wildlife Enhancement (SAFE), which improves regional high-priority wildlife habitat, the LaMoure County FSA office contacted Schlenker, knowing that he was interested in re-enrolling land into CRP.

“When I got the application, I signed it and sent it back the very same day,” said Schlenker. As luck would have it, his 312 acres of land included the one millionth acre enrolled under the North Dakota SAFE initiative that protects 69,000 acres of land in the Coteau-Drift Prairie.  The project improves habitat for waterfowl, shorebirds and terrestrial birds in this particular area of North Dakota.

A short walk across Schlenker’s property reveals the effectiveness of SAFE and CRP.  Sharptail grouse erupt from the thigh-deep grass while song sparrows and other smaller songbirds cling to taller stalks and sing in the prairie wind.  Mallard ducks, bumped from their nests, circle overhead.  White-tailed deer run off in the distance, as a coyote trots along the edge of the property. 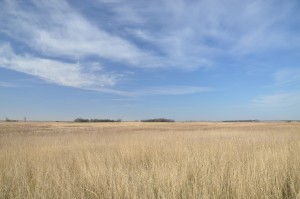 The North Dakota SAFE program protects 69,000 acres of land in the Coteau-Drift Prairie. The project improves habitat for waterfowl, shorebirds and terrestrial birds.

But the program doesn’t just benefit wildlife.  A local honey producer places hives at the corner of the property each year, reaping the benefit of the large expanse of grass and flowers free from pesticides and other chemicals.  And the grass provides a benefit to Schlenker’s cattle operation too.  “A lot of the other CRP has been broken up for crops, this gives something for the cattle to eat if there’s a drought,” said Schlenker.  Through emergency haying and grazing provisions and mid-contract maintenance, CRP adds a safety net to livestock producer’s bottom line.

To date, there are 97 approved SAFE projects in 37 states and Puerto Rico.  To learn more about the State Acres for Wildlife Enhancement program, or the Conservation Reserve Program, visit www.fsa.usda.gov/conservation, or contact your local FSA county office.  To find your local FSA office, visit http://offices.usda.gov.

One Response to USDA Farm Service Agency Hails Two Environmental Milestones in One Year: The 30th Anniversary of the Conservation Reserve Program, and 1 Million Acres Enrolled in its Wildlife Protection Offshoot.