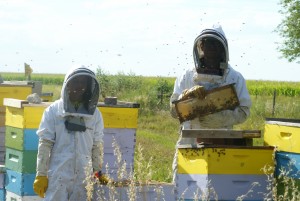 Siblings, Peyton and Kenna Krahulik, used a Farm Service Agency Youth Loan to start a honeybee operation that they hope will fund their college education.

Some siblings start lawn-mowing businesses or shovel snow to earn cash, but one set of siblings in Nebraska are the “bees knees,” overcoming stinging setbacks to reach success as sweet as honey.

Peyton and Kenna Krahulik grew up on a farm with a variety of animals. They joined 4-H when Peyton was 9 and signed up as Independents.  In 2014, they joined the “Just Kidding Around” club, where they have showed every animal (except goats, for which the program was named!). And they did all the things that kids do in a farm community. But when they met Tom Openeer, things changed.Openeer is a beekeeper. He placed hives on their property. That gave Krahuliks the bug to raise bees.

Before Openeer took his bees there  four years ago, the kids had talked about starting their own beekeeping business. So they bought five hives from Openeer in the spring of 2013 using money they received when they sold their 4-H animals at fair in 2012.  That is when they got the idea that maybe they could raise bees and sell honey for college money.  The only problem was they only had five colonies and they figured they would need 100 by the time Peyton graduated high school. But how could they finance more bees?

Their mother, who owns her own farm, has used services from the U.S. Department of Agriculture (USDA) Farm Service Agency (FSA).  She told her children about the FSA Youth Loan, so they went down to their local FSA office in 2014. They talked, secured a loan for $5,000 each and bought 45 colonies, some as nucs from a Sandhills beekeeper and some as package bees.

“They were well-versed,” said Roger Joekel, FSA loan manager. “Usually the parents do all the talking [when they come in for a loan], but with these kids, it was the other way around.

“It’s fun to be among the hives,” said Peyton, 17, the older sibling. “It’s very calming. If you’re not calm, they can get aggressive.”

Both Peyton and his younger sister, Kenna, 14, have been stung a few times, but they say it’s just part of the job. The pain is worth the reward, according to the brother-sister team, because they’re raising money for school. Peyton, a high school junior, plans to sell enough honey to pay for college at the University of Nebraska at Lincoln. Kenna wants to go to college, too.

Their brand of honey, Sparrowhawk, has flown against some pretty strong headwinds. The duo lost hives to weather and disease. In fact, none of the original 50 hives survived. Nevertheless, Peyton and Kenna currently operate 30 hives. Kenna said they have Italian, Russian and Carniolan bees.  She sings to them to keep them calm, preferably pop tunes. Peyton added the bees are not Rock and Roll fans.

During the August harvest, just one box of bees can produce between 40-60 pounds of honey and some hives are five or more boxes tall.

They sell Sparrowhawk honey for $18 per quart.

“If you’re going to raise bees, you have to study more about them. Research the bees and check on them once a week,” said Peyton. Kenna added, “We planted more pollinator crops like alfalfa, rapeseed, and pollinator flowers.”

“I’ve learned more from experience than studying,” said Kenna. To be successful is a good combination of hands-on training, studying and learning from experienced beekeepers.

Ernie Griffiths, the siblings’ current mentor, has more than 100 beehives. He’s proud of his mentees’ accomplishments and said it’s up to the Krahuliks how far they take their success.

“Our future is tied up with young people,” said Griffiths.

Griffiths stressed the significance of young people becoming involved with farming. “It isn’t important if you don’t want to eat,” he said.

He also added bees are responsible for pollinating 40 percent of all crops. He agreed that pesticide, herbicides and insecticides are potential dangers for bees, their honey and pollination.

Peyton and Kenna have learned more than a few things about beekeeping. Their discoveries: avoid cold, northern winds; watch out for mites; stay away from areas where chemicals may linger on pollinating crops; and use sugar water for feed.

Peyton and Kenna also had advice for those interested in getting into beekeeping and using a Youth Loan. They said pay attention to your mentor and do your research. Make sure you ask lots of questions and have your mentor explain everything they are doing as they’re doing it.

Interested in a Youth Loan? A borrower must be between the ages of 10-20 years old, bring in a business plan and identify a farming mentor.  To learn more about FSA Youth Loans, visit www.fsa.udsa.gov/youth-loans or contact your local FSA office. You can find the office address on the Internet at http://offices.usda.gov. To learn more about bees and other beneficial pollinators, click here.