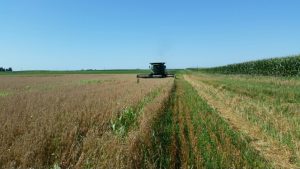 Lehman Farms grows organic oats which are sent to Grain Millers, Inc. where they are used in cereals, bars and breads.

Lehman Farms has been a part of Iowa’s agriculture industry since the 1800s.

After immigrating to the Polk County area from Switzerland, the Lehman family started their farm in 1868. The legacy of this family lives on through Aaron Lehman, a fifth-generation farmer who is still operating on the land his ancestors originally acquired 148 years ago.

“I really enjoy being connected with the land,” Aaron said. “Growing up, I saw how devoted my parents were to their land and animals. I love getting to work outside with my family.”

Lehman Farms is currently operated by his father, Phil Lehman, Aaron and his wife, Nicole, along with their children, Jordan and Benjamin. The original farm was primarily a dairy and creamery. However, Phil sold their dairy cows when Aaron was a child with the goal of expanding their grain and crop production.

Oats are known to lower cholesterol levels and blood pressure, and be packed with fiber. The organic oats from Lehman Farms are sent to Grain Millers, Inc. where they are used in cereals, bars and breads.

Oats are not only beneficial to the body, but are good for the fields they grow in by improving soil health.  “Oats are different from the other crops we produce,” Aaron said. “While other crops can be more intensive, oats generally take a little less input.”

While their oat operation is fully organic now, it hasn’t always been that way. The Lehman family started to convert their farm from fully conventional crops to partially organic in 2006.

“We realized it would be a way to diversify and expand our operation,” Aaron said. “Having an organic field requires a lot more time and management. We had to learn to use natural inputs and have longer crop rotations.” Lehman Farms converts one field to organic per year.

“A challenge we face as farmers is finding ways to become more sustainable,” Aaron added. “Just having longer rotations is a definite step in the sustainable direction.”

While the Lehman family has adopted organic practices in their operation, they take the time to share their knowledge with other farmers in Iowa. Aaron believes the best way for farmers to learn is by leaning from each other.

At the beginning of June, he had the opportunity to speak to U.S. Agriculture Secretary Tom Vilsack and Cuban Agriculture Minister Gustavo Rodriguez Rollero about the family operation when both visited Lehman Farms during Rodriguez’s historic trip to Iowa.

“It was a real thrill to get to be a part of that conversation. From a farming standpoint, to be able to share what we are dealing with and hear what is going on in Cuba, and to have that conversation on our farm, was just incredible,” Aaron said. “It was evident that the secretary and minister truly do want to learn about one another’s culture and agriculture. It was fantastic.”

Lehman Farms has been around for nearly a century and a half and Aaron hopes to see it continue on with his children. “Iowa is defined by its relationship with farming,” he said. “Not only is the vast majority of Iowa farm land, but the vast majority of people are connected with agriculture. I love that.”