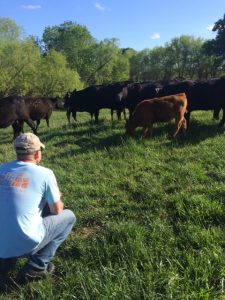 Chad and Melissa Wise started their livestock operation in 2012 and their herd has grown to 55 head today.

Aside from the farm, Chad is a lieutenant colonel in the U.S. Army and an assistant professor at the Army Command and General Staff College in Fort Leavenworth, Kansas. Melissa is a certified public accountant (CPA) and runs her own accounting business. After getting married in 2000, Chad and Melissa lived in eight states and over the last 15 years, Chad has been deployed to Korea, Egypt, Kuwait, Iraq, Afghanistan, and Pakistan. In 2012, when Chad was notified that he would be serving back-to-back deployments, the couple decided to put down roots in Fort Scott, Melissa’s hometown. The same year, Melissa opened her CPA office and they started their beef cattle operation.

“Farming is a financial commitment,” Chad said. Starting out with an original number of 10 head of cattle, they acquired the land and purchased minimal farming equipment. The herd has grown to 55 head over the span of four years.

“Tax season is also calving season for us, so it was difficult to balance my daytime job with the farm, but having the ability to take my work home allowed me to be at the farm at critical times,” said Melissa. 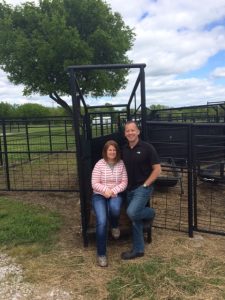 Melissa and Chad Wise on their farm in Fort Scott, Kansas.

While Chad was overseas, Melissa had the help of her father, Bob Collins, who still manages the day-to-day operations. Bob is a fourth-generation farmer, having produced crops and managing his own cattle operation.

“My mother taught me to be very independent, so I was never intimidated by having to run the farm without Chad, but I also knew my dad was a phone call away,” Melissa said. “Working with my dad brought us closer together.  It was an opportunity for him to pass on his knowledge of something that he loves to his little girl. I am so thankful for him and the extra time we were able to spend together.”

After Chad returned home in 2015, they established the Fort Wise Pumpkin Company. The pumpkin patch is military themed and its slogan is “Fort Wise: Where Pumpkins and Patriotism Merge.”

“We were stationed in locations were pumpkin patches and cider mills were a huge attraction,” Chad said. “We were just lured into the experience.”

Starting last year in October, in the spirit of the season, they decided to annually host weekend events for the public at Fort Wise Pumpkin Company. Families enjoyed the pumpkin patch, a corn maze, a youth zip line, Army-truck hayrides and more.

“There is something calming about agriculture. There is a sense of commitment and completion. Due to constant rotations in the military, you don’t always get to see a project from start to finish,” Chad said. “In agriculture, you see a calf being born, you then get to raise it and breed it back. You get to see the whole cycle. Agriculture is so natural and rewarding.”

Between 2009 and 2015, USDA invested over $1 billion in more than 40,000 local and regional food businesses and infrastructure projects.