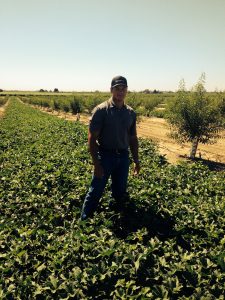 After watching the almond industry grow throughout his childhood, Andre Alves decided to start his own almond orchard in California.

At 26 years old, Andre Alves owns his own successful almond orchard in a beautiful California countryside and strives to grow the best product for his customers.

The U.S. Department of Agriculture (USDA) started an initiative called Know Your Farmer, Know Your Food (KYF2) to introduce consumers to the people who produce the food that fill America’s supermarkets. USDA launched the initiative in 2009 to build stronger relationships between consumers and agricultural producers, and further, to encourage expansion of direct sales at local and regional markets.

“To say I did this all on my own [two years ago] is a real accomplishment to me,” says Alves.

Alves learned his trade the traditional way, from his father. Today, they are California’s largest crop, with the state providing 80 percent of the global almond supply.The demand for almonds is growing every year. The nut is heart healthy, contains six grams of protein per ounce and is rich in magnesium and potassium.

Alves has witnessed the growth in the almond industry since his childhood. He was brought up around almond farming in Central Valley California and was inspired by how successful his parents were with their orchard, so he decided to get into it on his own.

According to the younger Alves, his father is the life blood of his inspiration. He watched his father do the hard labor, that intensive work that made his orchards grow and mature. He observed how hard work and determination produced success.

“He’s a machine,” said Alves. “He would work a 12-hour shift, come home and then farm. The music doesn’t stop for him.”

Alves says his father still inspires him, but now it’s through his helping hand. He’s assisting his son grow the younger man’s business, too.

“He’s always there to support me. He’s my right-hand man.”

Alves was only a year out of college when he began to pursue his dream.  But banks weren’t ready to give him a loan. To get started was a huge financial challenge.

Luckily, his local Farm Service Agency (FSA) was able to secure him a Farm Ownership Loan and a Farm Development Loan, and he purchased 15 acres of property that had been abandoned for nearly 30 years.

“It was a weedy mess,” said Alves. “The condition of the ground was out of control.” 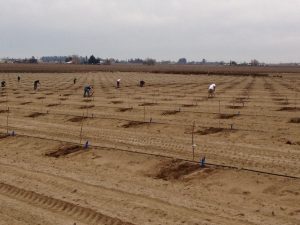 Alves grows almonds on 15 acres and sells his crop to local packaging companies.

Alves explained that he got his property cleared and ready for planting. Once that effort was completed, it became easier, because almonds are a low-maintenance crop. He’s able to maintain a job during the day and come home to deal with his almonds after that. Once picked, he sells them to local packaging companies.

What motivates Alves, he says, was that he was able to transform where the land was desolate into a beautiful almond orchard. He says he hopes his good fortune continues into the future so he can enlarge his almond orchards. Further, he intends to build a home on his property and watch his family grow, too.

For more information on FSA programs and opportunities that support the local and regional supply chain, please visit www.fsa.usda.gov and the USDA Know Your Farmer website at www.usda.gov/kyf.