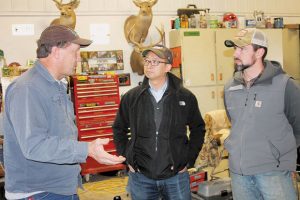 Joe Dunn (left) talks to USDA Deputy Under Secretary Lanon Baccam and his son-in-law, Aaron White. Baccam visited the Dunn farm in central Iowa to announce changes to the CRP.

USDA officials came to the Joe Dunn farm near Carlisle, Iowa, to announce the change, saying that, as of Jan. 9, some landowners with property in existing CRP contracts would be able to terminate those contracts early without a penalty as long as they are transferring the property to a new or beginning farmer.

The idea, according to USDA Deputy Under Secretary Lanon Baccam, is to find new and creative ways to aid new and beginning farmers.

Farmers in some areas have been frustrated by the fact that some CRP payments have been higher than a farmer could afford to pay to use the land for pasture.

“Let’s take some of the least sensitive land and get that back into production,” he says.

Aaron White, who is married to Dunn’s daughter, is a teacher, a Marine Corps veteran and a beginning farmer who has a small cow-calf herd.

“I think the biggest challenge beginning farmers face is land access,” White says. “This will help with that. This program could help bring farmers and landowners together.”

Dunn agrees that land acquisition is a challenge for young farmers.

“Whether it is Aaron or me, it’s very competitive (finding land to rent),” he says, adding he is glad the most sensitive land will remain in the CRP.

“A lot of ground is in CRP for a reason,” Dunn says.

The change was first suggested by the Land Tenure Advisory Subcommittee, formed by Secretary of Agriculture Tom Vilsack in 2015. The subcommittee was asked to identify ways the department could modify its programs or rules to address the challenges of beginning farmers.

Normally if a landowner terminates a CRP contract early, he or she is required to repay all previous payments plus interest, Baccam says. The new policy would waive the repayment if the land is transferred to a new farmer or rancher, either through a sale or through a lease with an option to buy.

Since CRP enrollment is now capped at 24 million acres, the early termination could allow the USDA to put some pasture land or relatively good crop land back into production while opening up the possibility of contracts for more environmentally sensitive land elsewhere.