Oyster Producers are “Farmers of the Sea”

Posted on September 8, 2017 by cassiebable 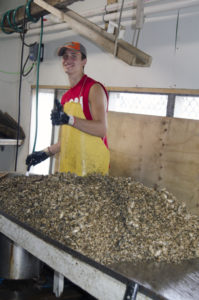 As efforts continue to improve the water quality of Chesapeake Bay, oyster farming is being looked at as a way to filter bay waters, while also creating a viable shellfish industry that augments traditional “wild” oyster harvesting operations.

Oysters are among the most valuable fisheries in the Chesapeake Bay.  According to the National Oceanic and Atmospheric Administration the value of oysters was $15.7 million in Maryland and $28 million in Virginia in the most recent complete reporting year.

Oyster farms utilize stacked trays which usually sit on the bay floor.  The oyster farms have much in common with traditional farms: drought, storms and other factors can affect oysters, infrastructure and destroy thousands of dollars-worth of production. USDA is involved because the Farm Service Agency (FSA’s) Noninsured Crop Disaster Assistance Program (NAP) provides a safety net to help qualified, affected producers recover.  Also, recent changes to the Farm Storage Facility Loan Program (FSFL) make it possible for oyster farmers to apply for loans to buy trucks with refrigeration units to help bring their live harvest to market.

Earlier this summer, a group of Farm Service Agency staff from the District of Columbia and Maryland visited the University of Maryland Center for Environmental Science Horn Point Oyster Hatchery on the Eastern Shore and also saw a working oyster farm on Hooper’s Island. They learned about oyster production methods, and the effort it takes to bring mature oysters to market.

FSA Maryland Farm Programs Chief Bob Wevodau says two NAP claims have already been filed in his state, and he sees demand growing in the future.  “The FSFL side also has a lot of potential. The industry needs refrigerated trucks and walk in coolers.”