When Disasters Hit, Help is as Close as Your USDA Service Center 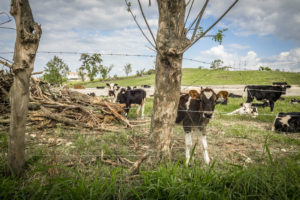 Dairy farmers in Puerto Rico were recipients of the new USDA Dairy Assistance Program due to Hurricane Maria. Here, a “life pole” provides support to the fences, while providing shade to the livestock as the trees grow. USDA photo by Preston Keres

When a disaster strikes, farmers and ranchers don’t want a process, they want help.

Last year was the worst for disasters in some time. According to the National Oceanic and Atmospheric Administration in 2017, there were 16 weather and climate disaster events with losses exceeding $1 billion each across the United States.

We all recall the hurricanes that devastated agricultural operations in Texas, Florida, Puerto Rico, and the U.S. Virgin Islands. There were wildfires in the plains states, the Southwest, California and drought in the upper Midwest, floods in Missouri, and a number of tornadoes. The aftermath can be just as bad as the event itself.

Thanks to a “toolbox” of Congressionally-approved disaster assistance programs, after any catastrophic event, a producer can walk into any one of 2,100 Farm Service Agency offices the next day and apply for help. At USDA, we provide emergency loans, farm insurance, and a long list of assistance designed to help producers who lose livestock, crops or trees and bushes. Collectively, it is known as the “farm safety net.” 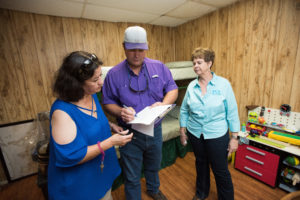 Craig and Joyce Lenhart had finished their harvest of sorghum and shipped most of it when Hurricane Harvey hit their three grain bins and elevator system, demolishing them all on Aug. 25, 2017. Co-farmer/producer Joyce Lenhart (left) receives help from USDA employees. USDA photo by Lance Cheung

On Feb. 9, President Trump signed into law a measure that adjusts several of the provisions of the USDA safety net to make it easier for affected producers to get assistance. For example, the Tree Assistance Program, which can be used by Florida citrus growers or Puerto Rican coffee producers to replace lost production trees, was significantly expanded. A loss cap on the Livestock Indemnity Program was lifted and more funding was provided. We are working as quickly as possible to make the changes mandated by Congress, and we are aware of the need for fast action.

We have some practice. For example, after hurricanes downed power lines and blocked roads in Puerto Rico, the dairy industry reached out for assistance. In two weeks, at the direction of Secretary Sonny Perdue, we created and stood up a program that guaranteed funding for cattle feed for hundreds of dairy producers on the island. When drought hit the Dakotas and Montana, we worked to allow emergency haying and grazing on conservation lands.

Now we have rolled out a new program, called the 2017 Wildfires and Hurricanes Indemnity Program to aid recovery by producers. And just this week, we announced we were issuing $34 million in the Emergency Assistance for Livestock, Honeybees and Farm-Raised Fish program (ELAP), which covers losses not addressed by other USDA disaster assistance programs.

The Bipartisan Budget Act also increased the amount of assistance made possible through ELAP. Now, we can pay producer claims without regard to a previous annual program funding cap beginning with the 2017 program year, and it will also permit payments to calculate and issue as 2018 and subsequent year ELAP claims are filed and approved.

For questions on disaster assistance programs, producers are asked to contact their local USDA service center.