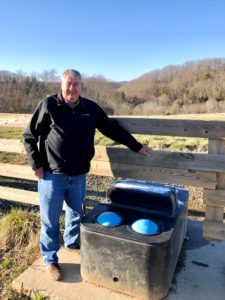 Bill Cooper, is a cattle farmer from Wythe County, Virginia, where he raises Angus cattle on the same land that his family has operated since 1941. Bill lives on the farm with his son, his grandchildren and great-grandchildren.

On the route traveling south from Wytheville, there is an abundance of cattle operations as far as the eye can see. One of these farms belongs Bill, which can be easily identified by the tree tubes that lead to his farm entrance.

Bill turned eight acres of his farm into buffer areas with the Conservation Reserve Enhancement Program, administered by USDA’s Farm Service Agency. CREP is part of the Conservation Reserve Program, a voluntary program that provides yearly rental payments to farmers who agree to remove environmentally sensitive land from agricultural production and plant species that will improve environmental health and quality.

With CREP, high-priority conservation goals are identified by the state, and then federal funds are supplemented with non-federal funds to achieve those goals. Participants remove cropland and marginal pastureland from agricultural production and convert the land to native grasses, trees and other vegetation or restore wetlands.

“Many of my neighbors have asked about the tree tubes,” Bill said, “They’ve got a lot of attention from people. I just explain what they are, and then I tell them about CREP and how much that program has improved my farm.” 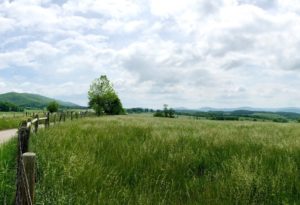 With help from USDA, Bill added fencing, pipeline, water troughs, two wells, a stream crossing and cattle walkway, and over 1,100 trees to his Virginia farm.

With both programs, he was able to add over 13,000 feet of fencing, 7,000 feet of pipeline, eight four-ball water troughs, two wells, stream crossing and cattle walkway, and over 1,100 trees.

“It was a fairly large investment, and it took the contractors several months to complete, but it was worth it in the end,” Bill said.  “Of course, before the troughs were installed, my cattle were walking to the spring in the middle of the farm to get their water.  Now they have a trough practically in each field, which I know has improved their weight retention and helped maintain their health.”

The fencing has made it easier for Bill to manage his cattle while also allowing him to extend his grazing ability by implementing rotational grazing.

“I would do it again, and in fact I would do it over one thousand times again,” Bill said.  “Participating in CREP and BMP has been the best thing I’ve ever done on this farm. I can already see so much benefit from everything we’ve done in these programs.”

USDA offers a variety of risk management, disaster assistance, loan, and conservation programs to help agricultural producers in the United States weather ups and downs in the market and recover from natural disasters as well as invest in improvements to their operations. Learn about additional programs.

For an interactive version of this story, visit #FridaysOnTheFarm.