Lead Your FSA: A Better Perspective 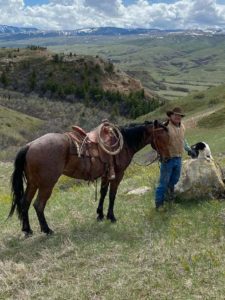 The nomination period for the USDA Farm Service Agency’s (FSA) annual county committee election began June 15 and continues through Aug. 1, 2020. Throughout the nomination period, we’ll be introducing county committee members across the nation. This week meet Clinton Small of Lodge Grass, Montana and a member of the Crow Tribe. Clinton and his family operate a cow-calf operation in the foothills of the Big Horn Mountains on the Crow Reservation along Rotten Grass Creek in southern Montana.

After serving active duty in the U.S. Marine Corp for four years, Clinton returned home and served as a power lineman and worked for the Montana State highway department. He started his ranching operation in 2001 alongside is wife, Lucinda, their children and his sister’s family. In 2015, he retired from his off-farm jobs and began working in agriculture full-time.

Clinton is serving his second three-year term as a member of the Big Horn County Committee for USDA Farm Service Agency. The area he represents encompasses the Crow Indian Reservation, however Big Horn County is home to two distinct tribal nations and reservations: the Crow and Northern Cheyenne. His first stint serving on the committee was as minority advisor for a one-year appointment. Advisors are selected to county committees representing significant numbers of minority or women producers but lacking such members on the committees. They provide important input representing the interests of underserved producers in decisions made by county committees.

Clinton enjoys working with the public and sees his role as informing producers about FSA program availability, answering questions and being a link between FSA and agriculture producers.

Clinton and other committee members were called to action the winter of 2017-2018. Montana was the epicenter for extreme weather and record-setting snowfall that winter, making times difficult for livestock and their caretakers.

FSA was there to help through a variety of  disaster assistance programs. Montana livestock producers received approximately $12 million in disaster relief through the 2018 Livestock Indemnity Program (LIP) with Big Horn County being the top paying LIP county in the United States. 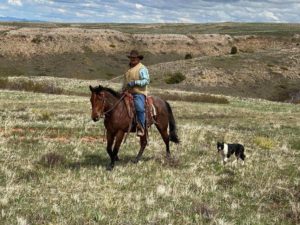 Clinton enjoys working with the public and being a link between FSA and agriculture producers.

“It saved a lot of people from complete disaster,” Clinton said noting that even with the federal assistance it was difficult for some producers to survive.

The Big Horn County committee members fielded some of the inquiries from fellow producers to prepare them for their office visit.

“It took a lot of pressure off of the office so when they (other producers) get into the office they knew what they needed to bring in,” Clinton said.

He encourages his fellow producers to consider running for county committee seat.

“The more people who understand the county committee and are part of the process – not just as a participant – will get a better perspective of what takes place in these decisions and more knowledge of FSA programs,” Clinton said.

This entry was posted in County Committee Elections. Bookmark the permalink.