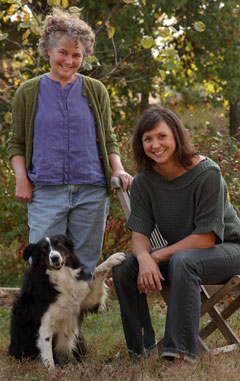 Jacqueline Smith, right, and Sarah Hoffmann, left, owners of Green Dirt Farm took their love of food and community-based farming and created a successful sheep dairy and cheese business in western Missouri. Their sheep cheeses can be found in various locations throughout the United States.

What might appear to be a simple sheep grazing operation just outside the skyline of Kansas City along the rolling hills of the Missouri River is much more than meets the eye.

Born from owners Sarah Hoffmann and Jacqueline Smith’s passion for food and community-based farming, Greed Dirt Farms  raises sheep, operates a dairy, and focuses on every detail from “dirt to the plate.

Using the U.S. Department of Agriculture’s FSA Farm Loan Program, the parlor at Green Dirt Farm — the dairy entity of the operation — was able to obtain financing to purchase milking equipment and livestock and help with annual operating expenses, such as feed and veterinarian services. FSA loan officer Tom Shelton has worked with Smith since 2008 to obtain resources needed to get the dairy operating.

“Jacqueline’s desire to farm comes from her love of agriculture and the farm lifestyle. She applies a very businesslike approach to managing the farm,” Shelton said. “I believe many beginning farmers could benefit by emulating her management style that produces a successful farm.”

Smith did an apprenticeship on another farm to gain experience and took agriculture entrepreneur classes. Starting from ground zero, they learned everything from using farm equipment to effective rotational grazing.

Today, Green Dirt Farm is milking 250 ewes, mainly East Friesian and Lacaune, and use high-density stock grazing by rotating the sheep once every 24 hours to optimize soil fertility, minimize soil erosion and strengthen the root systems of existing pasture.

“Since beginning working with Sarah in 2001, we’ve helped Green Dirt Farm design nutrient management plans as well as a unique waste management system,” said Breyfogle. “We’ve also helped Sarah convert her highly erodible land to pasture land, something that has aided tremendously in the conservation of the soil.”

So, why sheep’s milk?  Smith said the terrain of their farm was more suitable for small ruminants and the market was saturated with goats milk products. With 95 percent of all sheep’s milk cheese coming from Europe, the partners decided they would be part of a very small niche market.

“We really focus on farmers markets because we love them,” Smith said. “They’re a great way to interact with consumers. It creates this full circle. [Consumers] ask how this cheese was developed or what batch this cheese is and how well-aged it is, or any question that’s special and unique to that cheese.”

Those interactions generated more interest in visits to the farm to see the animals and the cheese-making process first-hand.

They saw the potential and hired an events manager to take on the task of developing the agritourism side of the business, focusing on food production. The farm also hosts farm-to-table dinners. They have become so popular that every scheduled dinner in the past three years has sold out.

Their success has gained national recognition. CNN named one of the farm’s cheeses as the top 5 American cheeses to try. In April 2012, their lamb and cheese products were featured in a segment of the Travel Channel’s Anthony Bourdain: No Reservations.

Next, they plan to expand marketing of their fresh, grass-fed lamb meat through direct sales to consumers and distribution markets.

This entry was posted in Atop the Fence Post. Bookmark the permalink.