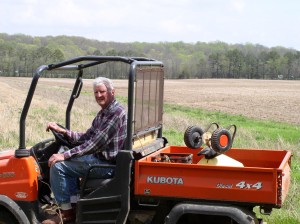 Tennessee’s Brendan Finucane utilizes CRP and converted crop acreage that was prone to flooding and subject to debris from the adjacent Red River into native grasses. The result was less cleanup work for him at planting time and more wildlife on his farm.

Like every farmer, Brendan Finucane needs rain to transform the seeds he plants into a bountiful harvest.  For Finucane, and others who farm along the Red River in Tennessee’s northeast Robertson County, too much rain during the growing season brings the constant threat of flooding and loss of thousands of dollars of farm income.

Finucane had suffered lower yields and even total crop losses on the acreage near the river in three out of the last 10 of years. These circumstances led Finucane to his local USDA Farm Service Agency (FSA) office for suggestions on how he could better use and protect the land.

In 2012, Finucane, who operates Rockjolly Farm, enrolled six acres of the 100-acre field near the river bottom in USDA’s Conservation Reserve Program (CRP). These acres were sown to native grasses providing enhanced habitat for wildlife.

CRP is celebrating its 30th anniversary in 2015 and is among the largest private lands program for conservation used extensively throughout the United States to reduce soil erosion, improve water and air quality and provide wildlife habitat.

The voluntary program allows eligible landowners to receive annual rental payments and cost-share assistance to establish long-term, resource-conserving covers on eligible farmland throughout the duration of their 10-to-15-year contracts.

In the past, Finucane’s farm ground in the Red River flood plain was planted in a rotation of wheat, soybean and corn, which, after heavy downpours, would be riddled with rock debris.

“During the 1940’s a natural gas pipeline was laid across the riverbed and has caused the limestone rock debris to continually surface over time,” said Finucane. “Flooding has increased the debris and the only clean up option was to pick up the limestone by hand to allow for planting.” 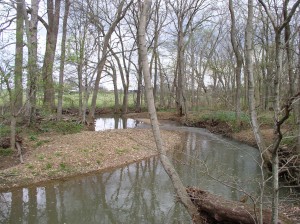 Finucane said that although the CRP rental payment might be slightly less than what he might have earned from his crop production, he thought there was a greater benefit in returning the land to native grasses. The result was less cleanup work for him at planting time and more wildlife on his farm. He’s even noticed a Great Blue Heron nesting site in trees along the CRP plantings.

Since its inception on December 23, 1985, the CRP program has helped prevent more than eight billion tons of soil from eroding and protected more than 170,000 stream miles with riparian and grass buffers, more than 100,000 acres of bottomland hardwood trees, nearly 300,000 acres of flood-plain wetlands, and 250,000 acres each for duck nesting habitat and upland bird habitat.

For an interactive tour of CRP success stories from across the U.S., please visit the FSA CRP 30th Anniversary website at http://www.fsa.usda.gov/CRPis30.