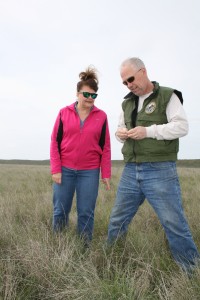 Editor’s note: The Washington State Department of Fish and Wildlife assisted with the development of this article.

Washington state’s sage-grouse population has been on the decline since 1985, but for the past five years Farm Service Agency’s (FSA) Conservation Reserve Program (CRP) and its State Acres for Wildlife Enhancement (SAFE) program have helped to establish improved sage-grouse nesting habitats. As a result, the county has become one of only a handful across the nation with an increase in sage-grouse populations during the past 25 years.

The SAFE program has proven to be popular with local landowners. In fact, in May 2010, during the initial sign-up period, Douglas County reached the enrollment cap of 38,000 acres on the first day, with some landowners camping outside the FSA office to ensure they were able to participate.

To date, 61,000 acres are now enrolled in the SAFE program in Douglas County through 344 contracts with landowners. Established SAFE acres provide diverse mixes of native grasses and forbs and supply top-quality grouse habitat in the region.

The SAFE program offers 15-year contacts paying landowners an annual fixed rate per acre in exchange for the land being managed for wildlife habitat.

“The lengthy contracts, along with financial incentives to help establish the cover, made the program very attractive to area farmers,” said Michel Ruud, FSA County Executive Director for Douglas County.  “Much of the land enrolled in SAFE is marginal cropland at best.  SAFE provided a win-win for the birds, the farmers and the environment.”

CRP which is celebrating its 30th anniversary in 2015, is among the largest private lands programs for conservation used extensively throughout the United States to reduce soil erosion, improve water and air quality and provide wildlife habitat.

It is a voluntary program that allows eligible landowners to receive annual rental payments and cost-share assistance to establish long-term, resource-conserving covers on eligible farmland throughout the duration of their 10-to-15-year contracts.

“CRP is the main reason why Douglas County’s sage-grouse population increased between 1985 and 2010 while sage-grouse populations on public lands in Washington have actually declined,” said Don Larsen, a biologist with the Washington State Department of Fish and Wildlife, and a USDA partner in the SAFE program.  “Research by the Washington Department of Fish and Wildlife found that half of sage-grouse nesting occurs in CRP fields, even though CRP fields are only a fraction of the landscape in Douglas County.”

Sage-grouse hens nesting in taller grass, like that found in CRP fields, have higher nest success.  CRP acres with diversity of plant height and type, including grasses, broadleaf plants and sagebrush, give sage-grouse the best chance of successfully nesting, raising their young, and surviving winter.

“Habitat establishment in arid areas like Douglas County requires time and patience, but these first SAFE fields are already beginning to provide quality habitat for sage-grouse,” Larsen added. “Habitat value will increase over time as SAFE plantings mature, continuing this CRP and sage-grouse success story into the future.”

Since being established on Dec. 23, 1985, CRP has helped prevent more than 8 billion tons of soil from eroding and protected more than 170,000 stream miles with riparian and grass buffers, more than 100,000 acres of bottomland hardwood trees, nearly 300,000 acres of flood-plain wetlands, and 250,000 acres each for duck nesting habitat and upland bird habitat.

For an interactive tour of CRP success stories from across the U.S., please visit the FSA CRP 30th Anniversary website at http://www.fsa.usda.gov/CRPis30. To find your local USDA Service Center please visit http://offices.usda.gov.

This entry was posted in Atop the Fence Post, CRP is 30, Features, Regional Posts and tagged Agriculture, conservation, Conservation Reserve Program, CRP, FSA. Bookmark the permalink.