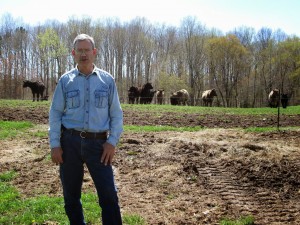 Virginia producer, Max Whitlock, sees the Conservation Reserve Enhancement Program (CREP) as a risk management tool in addition to a conservation program. While the program benefits include cleaner water in the streams and increased wildlife habitat, it also means keeping his cattle safe and away from the dangerous edges of the marshy stream bank.

Farming is a risky business and like most, Virginia producer Melvin “Max” Whitlock has experienced his fair share of livestock losses. Over the course of the last several years, Whitlock had the misfortune of losing two calves to the marshy stream edges on his property, and knew he had do something to protect his investment.

Whitlock, a retired firefighter, runs a 40-head cow-calf operation near Blackstone in Nottoway County that he purchased almost 17 years ago. The 107-acre farm consists of ground for hay, pasture, wooded areas and streams.

“I was out counting calves one day and came up short,” said Whitlock. “I went out again the next day and spent a significant amount of time walking the pasture, but still couldn’t find the missing calf. A couple days later I was walking along a wet area near the stream and there it was dead, stuck next to a big clump of swamp grass.”

Whitlock turned to the USDA Farm Service Agency (FSA) for assistance and learned that the Conservation Reserve Enhancement Program (CREP) could help him establish a riparian buffer, build fence to keep the cattle off the stream banks and install an alternate water source.

CREP targets high-priority conservation issues by forming a partnership between the federal government and state or tribal governments. Once a CREP agreement is established, landowners can receive annual rental payments in exchange for removing environmentally sensitive land from production and implementing acceptable conservation practices.

Together, USDA, the state of Virginia and local Soil and Water Conservation Districts (SWCD) have focused on improving the state’s water quality and wildlife habitat by offering financial incentives, cost-share assistance and rental payments to land owners who voluntarily restore riparian forest buffers, grass and shrub buffers and wetlands. Whitlock received cost-share assistance from USDA and the Piedmont Soil and Water Conservation District.

CREP is an offshoot of USDA’s Conservation Reserve Program (CRP), which is celebrating its 30th anniversary in 2015. Nationwide, more than 1.2 million acres from nearly 50,000 farms are enrolled in CREP.

In Whitlock’s case, the conservation program is improving water quality in the streams and creating wildlife habitat, but also serves as a risk management tool, keeping his livestock safe by limiting preventable losses.

“People ask me a lot about how CREP is working on my farms,” said Whitlock. “I always say you can’t put a dollar figure on prevention, but I do know I have not lost one animal to the mud since.”

CRP is among the largest private lands program for conservation used to reduce soil erosion, improve water and air quality and provide wildlife habitat. CRP is a voluntary program that allows eligible landowners to receive annual rental payments and cost-share assistance to establish long-term, resource-conserving covers on eligible farmland throughout the duration of the 10 to 15 year contract.

This entry was posted in Atop the Fence Post, CRP is 30, Features, Regional Posts and tagged Agriculture, conservation, Conservation Reserve Program, CRP, FSA. Bookmark the permalink.