Kentucky Farmer Seizes Opportunity to Put Down Roots of His Own 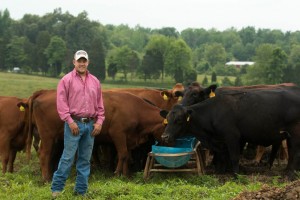 For the first 25 years of Daniel Hayden’s life, he has dedicated his time working on other people’s farms. He fed cows, cut hay, hauled tobacco and for the past five years, managed his parents’ Kentucky farm operation. But he never had his own farm.

That all changed last year.

“I found a great cattle farm not far from my parents’ operation. I just wasn’t sure if I could borrow the money for it, being a young, beginning farmer,” said Daniel.

The 63-acre farm located in Ohio County, Kentucky, would cost him $226,000. He also needed operating funds to purchase cattle and other supplies to get started.

Daniel is one of a small group of individuals trying to start a farming operation in one of the most difficult times in history. Record high costs for land, machinery and inputs like feed and fertilizer have made it nearly impossible for young, beginning farmers to get started.

Under the Obama Administration, the U.S. Department of Agriculture (USDA) has worked to make it easier for beginning farmers and ranchers to own and operate their own business. The Beginning Farmer and Rancher Development Program, funded in the 2008 and 2014 Farm Bills have awarded $90 million in grants to organizations in 48 states between 2009 and 2015 to support beginning farmers. USDA developed a website to guide beginning farmers through programs and funding available to them, and the Farm Service Agency (FSA) provides loans to help new and beginning farmers get started or expand their operation.

That is what helped Daniel, who didn’t know how to follow his dream of owning a farm and still meet all of his obligations. “I didn’t know if the numbers on paper would work,” said Daniel.

Yet, he was confident he was able to do it because he had previous experience. At age 12, Daniel came to FSA and received his first youth loan. He used it to purchase cattle and start his own business on his parents’ farm.  The FSA Youth Loan program allows youths to borrow up to $5,000 for an agricultural related project associated with 4-H, FFA or other agriculture organization. Daniel received these loans for several years until he was 18 when he received his first FSA Microloan that he used to acquire cattle and equipment.

The microloan program allows beginning, small and mid-sized farmers along with non-traditional farm operations to access up to $50,000 in loans using a simplified application process. Participation in the program increased 58 percent since last year, with 5,000 microloans issued this year alone. In total, more than 13,000 microloans have been issued since its inception in 2013.

“When Daniel came to me with the purchase contract for the farm and was excited about the opportunity,” said Kentucky Farm Loan Manager Michael Miller. “He wanted to know if there was anything FSA could do to help make it happen.”

Daniel qualified for the FSA Farm Ownership and Operating Loans that he needed to purchase the farm and stock it with cattle. “I had always envisioned myself putting down roots of my own and with the help of FSA, I already had a good start,” said Daniel.