James Blackwell is a third-generation landowner and nature lover in Littlefield, Texas, which is northwest of Lubbock in the southern reaches of the panhandle, a one-time Dust Bowl region. He has about 2,500 acres straddling Lamb and Hockley Counties. When the USDA introduced its Conservation Reserve Program (CRP) 30 years ago, Blackwell jumped at the chance to do his part. Since the beginning, he has gone the extra mile to protect and nurture local wildlife and flora.

Blackwell initially set aside 180 acres for conservation efforts in 1986, the beginning of CRP. He established an area of suitable grasses in which the Lesser Prairie Chicken could thrive. Since then he has gone much further to help the conservation effort and local wildlife. The move has in turn helped his land.

Over the years, Blackwell added 680 acres of established cover. Although some established cover grew better than native grasses that have struggled in recent years, he believed in the value of using local seed.

He took a risk and transitioned 360 acres from introduced grass to natural local grasses. The extra effort paid off when he saw growth in the Lesser Prairie Chicken population. But his effort did not stop there.

Blackwell added four acres of a wildlife food plot and performed annual seeding to ensure further growth in both local grasses and the Lesser Prairie Chicken population. He also planted smooth sumac, Russian Olive trees and bushes. He then set up dirt tanks – a Texas term for small man-made ponds – in three areas filled by windmills. Ducks return every year to nest. Blackwell and his family see hatchlings pop out each new season. 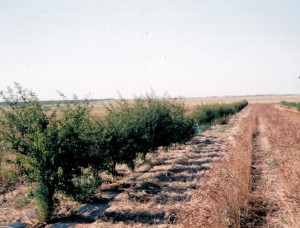 James Blackwell, a third-generation landowner in Texas has participated in the Conservation Reserve Program (CRP) since 1986. Blackwell plants Russian Olive trees to help local wildlife and repair land that became unfit for cultivation because of wind erosion.

More recently, Blackwell installed water guzzlers – apparatus to catch and hold rain – to provide water where it is scarce. He performed prescribed burns to clear undesirable grasses and shrubs.

His efforts have reached beyond his fence line. Blackwell encourages neighbors to help with conservation efforts. Now, about 1,000 acres near his land is managed to benefit wildlife.

“I wanted to help local wildlife and repair land that became unfit for cultivation because of erosion,” said Blackwell. “These practices have helped the wildlife tremendously. Besides the practices, Mule Deer are coming in and the quail population has been re-established. That’s beyond the fact that the practices also stopped erosion.”

Blackwell has been doing his part in CRP for 30 years, but he says he has no intention of slowing his efforts. He knows it’s good for everyone.

“I will continue conservation practices as long as I am alive,” said Blackwell. “It stops sand from blowing around the land, prevents erosion, and attracts wildlife. We want to provide an environment where people can enjoy the outdoors.”

Blackwell says conservation work is a family effort. He says he hopes to pass on sound conservation practices to the next generation.

CRP is a voluntary program that allows eligible landowners to receive annual rental payments and cost-share assistance to establish long-term, resource-conserving covers on eligible farmland throughout the duration of their 10-to-15-year contracts.