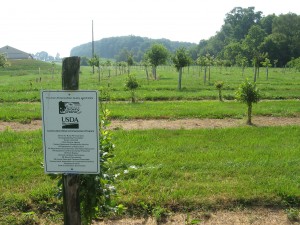 The Rohrer family helped to reduce nutrient and sediment loading of the Upper and Lower Susquehanna and Potomac River Basins by establishing riparian buffers and a contour grass strip with the help of the USDA Conservation Reserve Enhancement Program (CREP).

Roger and Kandy Rohrer and their children know that even small changes on their farm help clean up important natural resources not far away. The family farms in Pennsylvania’s rural Lancaster County. The Rohrers have noticed tremendous environmental benefits on their farm even with just a handful of acres enrolled in a popular U.S. Department of Agriculture (USDA) conservation program.

The Rohrer’s have used CREP to establish a 4.5 acre and a 4.3 acre riparian buffer, along with a three-acre contour grass strip.

“Before we bought our farm, there was no conservation work being done, no nutrient management, no stream fencing,” said Roger. “We implemented CREP to be proactive, and did it as part of a system of best management practices, including no-till production, grassed waterways, crop residue and cover crops.”

Their farms consist of more than 200 acres, of which 150 acres is farmed using mostly no-till practices with a rotation of corn, soybeans, wheat, grass hay and Pennsylvania-type 41 cigar tobacco. They also raise up to six flocks of organic broiler chickens per year with each flock averaging around 156,000 birds.

The Rohrer’s were able to convert the farm’s poorest quality pasture into the riparian buffers, affecting water quality in nearby water supplies. The family’s conservation efforts also are influencing neighboring farms. Three municipal wells located on those farms are now being recharged with filtered water.

“The water quality in the farms’ streams has improved due to reduced runoff from adjacent cropland and waterfowl and whitetail deer, numerous small birds and animals are frequently seen in and along the CREP land,” said Chrystal Fetzer, USDA Farm Service Agency program specialist.

In addition to the benefits they see on their property, the Rohrer’s participation in Pennsylvania’s Chesapeake Bay CREP helps to reduce nutrient and sediment loading of the Upper and Lower Susquehanna and Potomac River Basins, which improves water quality and enhances wildlife habitat. 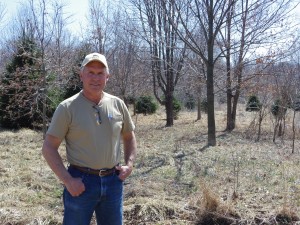 Roger Rohrer and his family took a proactive approach to conservation practices on their 200-acre farm.

Since its establishment, the Chesapeake Bay CREP project area has helped significantly reduce farm-field erosion, helped prevent sediment, nitrogen and phosphorous from reaching the Chesapeake Bay. It has restored and enhanced grassland habitats and riparian habitat corridors next to streams and wetlands and improved the water quality in areas of the Potomac and Susquehanna watersheds.

Roger and Kandy, their son and daughter-in-law Mark and Devon Rohrer, and son Todd Rohrer, have been recognized as a Pennsylvania century and preserved farm family. They have also been named Tyson Foods National Poultry Award winners, and in 2004 received Lancaster County Conservation District’s Outstanding Cooperator Award.

“The CREP acres are part of an important ecosystem which continues to develop rapidly with each passing year,” said Roger. “We want to be able to say that we are doing everything we can to protect our environment, and now we can.”

CREP is part of USDA’s Conservation Reserve Program (CRP). CRP is a voluntary program that allows eligible landowners to receive annual rental payments and cost-share assistance to establish long-term, resource-conserving covers on eligible farmland throughout the duration of their 10-to-15-year contracts.