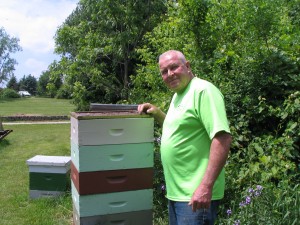 Michigan Beekeeper, Steve Reiger, lost 38 percent of his colonies in 2014 due to the unusually cold winter and Colony Collapse Disorder. Reiger used a Farm Service Agency disaster assistance program to replace the colonies he lost.

Steve Reiger has been captivated by bees since he was a young boy. So it is no surprise that he now has more than 100 colonies, received his Master beekeeper certification and is a mentor to other beekeepers.

Reiger, a beekeeper in Muir, Mich., gained his love of bees from his grandfather’s neighbor who kept honeybees on his property. “He lifted off the top [of the hive], and I looked, and here’s 20 to 30 thousand bees on the top,” said Reiger. “They didn’t buzz out after me or anything, and I thought that was quite fascinating.”

That neighbor was the first to teach Reiger about keeping and caring for honeybees. Since then, Reiger has trained and mentored hundreds of new beekeepers including 62 new beekeepers last year in Ionia County, Mich.

Yet, his extensive knowledge of beekeeping hasn’t made him invulnerable to losing bees. In 2014, Reiger lost 38 percent of his colonies due to the unusually cold winter and Colony Collapse Disorder — the unexplained disappearance of adult bees from the colony with a live queen and immature bees still present.

He reported his losses to the U.S. Department of Agriculture (USDA) Farm Service Agency (FSA) office in Ionia County and qualified for financial assistance from the Emergency Assistance for Livestock, Honeybees, and Farm-Raised Fish Program (ELAP). ELAP authorizes FSA to make payments to eligible producers of honeybees to help cover losses due to disease, adverse weather or other detrimental conditions.

Reiger used the payment to replace the bee colonies he lost. “The replacement costs are huge,” he said, adding that prices have increased significantly in recent years with the supply of honeybees dwindling and demand growing due to losses and an increased interest in beekeeping.

Honeybee populations have been reduced by diseases and pests like the Varroa mites, tracheal mites and Colony Collapse Disorder. According to the USDA Agricultural Research Service, total losses of managed honeybee colonies from all causes were 23.2 percent nationwide for the 2013-2014winter. This represents a noticeable drop in mortality compared to the 30.5 percent loss reported for the winter of 2012-2013 and compared to an eight-year average of winter losses of 29.6 percent.

In the meantime, one positive outcome is that more people are becoming aware of the importance of honeybees to the nation’s food supply. “Without bees, there is no food,” said Reiger.

This year, the Obama Administration announced the first national strategy to promote the health of honeybees and other pollinators. Last year, USDA provided $4 million in technical and financial assistance to help farmers and ranchers in the Midwest improve honeybee health by implementing conservation practices that will provide safe and diverse food sources for them. The department also provided $8 million in Conservation Reserve Program incentives for five Midwestern states including Michigan to establish new habitats for declining honey bee populations.

Reiger said he appreciates USDA helping the beekeeper because beekeeping is a highly rewarding occupation. “It will give you some of the best gardens, the most beautiful flowers, and what you do for the environment is extreme,” he said. “I love it, so that’s what I do.”

To learn more about the ELAP program, visit www.fsa.usda.gov/ELAP or contact your local FSA county office.  To find an office near you, visit http://offices.usda.gov

This entry was posted in Atop the Fence Post, Features, Regional Posts and tagged Agriculture, disaster, farmers, FSA. Bookmark the permalink.