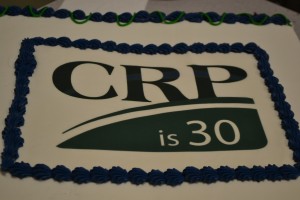 The Texas Farm Service Agency celebrated the 30th anniversary of the Conservation Reserve Program with partners and landowners on Nov. 30 in Amarillo.

Conservation enthusiasts across Texas joined USDA to celebrate the 30th anniversary of the Farm Service Agency’s Conservation Reserve Program (CRP) on Monday, Nov. 30. The event was held in Amarillo, which is centrally located in the Texas panhandle, just north of the south plains; regions that boast heavy CRP enrollment from county to county.

The celebration kicked off the Amarillo Farm and Ranch Show produced by IDEAg Group. With the help of IDEAg Group and the National Wild Turkey Federation, USDA hosted a reception that was attended by approximately 100 landowners, conservation partners and USDA employees.

Dan Durheim, Executive Director of Industry Affairs for the American Farm Bureau Federation opened the reception by applauding the great work farmers and ranchers do every day to enhance agriculture and their operations while protecting the environment. Gene Miller, a biologist with the National Wild Turkey Federation offered words of encouragement to the landowners and organizations that work to increase wildlife habitat through CRP.

Pfaff credited farmers and ranchers as being the first conservationists.

“CRP has been extremely popular and successful in Texas,” said Pfaff. “Some may say that was born out of necessity as a result of the fragile nature of the land in the plains, but I like to think that it’s largely because farmers and ranchers are the original land stewards.” 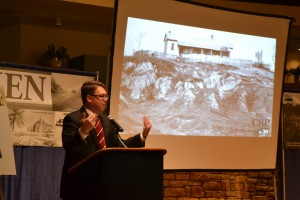 Canales pointed out that Texas leads the nation with 2.9 million acres enrolled in CRP on more than 19,000 contracts.

“CRP is popular and successful in Texas because landowners are committed to practicing sound conservation management practices,” said Canales. “These practices safeguard our natural resources and make positive impacts in our rural communities while preserving the land for the next generation.”

USDA highlighted the impressive stewardship efforts of nine exceptional CRP participants from across the state. The landowners represented a variety of CRP practices ranging from riparian buffers to pollinator habitat.

Kandy Persall, Oldham County landowner and CRP participant entertained the audience with a light-hearted story about her family’s Dust Bowl experience and decision to enroll in CRP. 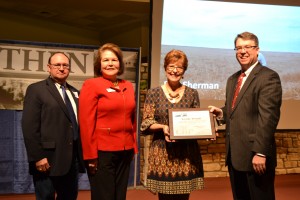 Attendees had the opportunity to visit with FSA and NRCS conservation program specialists and test their knowledge of plant species commonly found on CRP acres.

The CRP reception served as a great kick off for the December opening of the 49th General CRP sign-up that runs through Feb. 26.

Since being established on December 23, 1985, CRP has helped prevent more than 9 billion tons of soil from eroding and protected more than 170,000 stream miles with riparian and grass buffers, more than 100,000 acres of bottomland hardwood trees, nearly 300,000 acres of flood-plain wetlands, and 250,000 acres each for duck nesting habitat and upland bird habitat.

FSA looks forward to working with landowners and conservation partners to continue the success and benefits of conservation programs.