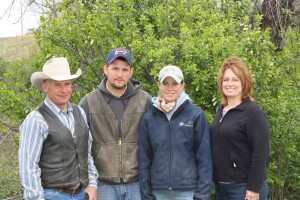 Like many ranchers in the northern Plains, Jason and Susie Reed will never forget the first week in October 2013. Up to 60 inches of snow fell in parts of eastern Wyoming and western South Dakota, surprising everyone and putting every rancher’s grazing livestock at risk. The unexpected early-season snowfall became known as Winter Storm Atlas.

According to the South Dakota Department of Agriculture, approximately 45,000 head of livestock perished in the storm. Among the losses were cattle from Reed Ranch, operated by Jason and Susie along with their daughter and son-in-law, Jerylin and Isaac Dahlman. But things could have turned out worse.

“The livestock had blown in through the fences and took shelter along the creek and trees,” said Jason. “I am sure that riparian area saved the lives of a lot of livestock.”

A riparian buffer is a strip of trees bordering perennial or seasonal streams that help improve water quality and create habitat for fish and wildlife. In the Reed’s case, the riparian buffer became a safe haven for livestock during an unusually heavy snowstorm. 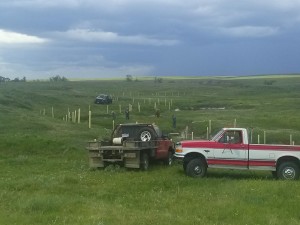 The Reed family used the Conservation Reserve Program (CRP) to install a riparian buffer along Stoney Butte Creek. The Reed’s staked the land in preparation of planting a border of trees along the creek.

CRP, which is celebrating its 30th anniversary in 2015, is among the largest private lands program for conservation used extensively throughout the United States to reduce soil erosion, improve water and air quality and provide wildlife habitat.

CRP is a voluntary program that allows eligible landowners to receive annual rental payments and cost-share assistance to establish long-term, resource-conserving covers on eligible farmland throughout the duration of their 10- to15-year contracts.

Jason was no stranger to conservation prior to Winter Storm Atlas.  His father, James Reed, enrolled his first tract of land in CRP – 443 acres of former wheat fields – as the program was just starting.

“My father was really concerned with erosion and the CRP contract offered him fair compensation compared to producing wheat at the time,” said Jason. “James was pleased enough with the program that he enrolled another field into CRP the following year.”

When the elder Reed passed away in 2012, he passed his conservation practices on to his son. Jason Reed took over the CRP contracts and now actively maintains the land. Reed said he believes that CRP practices have improved the soil by returning the land back to its natural cycle.

“Somehow nature has a way of healing itself,” said Reed.

“CRP works the best when producers come to FSA with a conservation objective,” said Neill.  “Jason knew what he wanted to achieve and the CRP program fit into his conservation goal.”

In addition to saving the lives of cattle during Winter Storm Atlas, the riparian area has improved the Reed’s grazing rotation by separating a large pasture. Further, it has improved wildlife habitat and generated more diversity. The ranch is now home to turkey, sharp-tailed grouse, mule deer and pheasants.

By implementing an intense grazing rotation and range monitoring, the Reed family is advancing its conservation efforts. With the help of the Natural Resources Conservation Service (NRCS), the family has developed livestock watering systems throughout the ranch. The systems aid the family’s management of livestock and add a series of fabricated wind breaks. Through its conservation efforts, Reed Ranch has been able to increase land productivity, stocking rates and weaning weights of its livestock.

Since being established on Dec. 23, 1985, CRP has helped prevent more than 9 billion tons of soil from eroding and protected more than 170,000 stream miles with riparian and grass buffers, more than 100,000 acres of bottomland hardwood trees, nearly 300,000 acres of flood-plain wetlands, and 250,000 acres each for duck nesting habitat and upland bird habitat.

This article concludes the 30-story CRP series that highlighted conservation success from across the U.S. To view the stories, please visit the FSA CRP 30th Anniversary website at http://www.fsa.usda.gov/CRPis30.