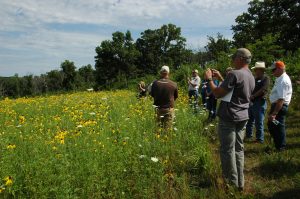 Just one county west of St. Louis lies Franklin County, Missouri, filled with rolling hills, diverse agriculture and some of Missouri’s finest Conservation Reserve Program (CRP) practices in the state. Approximately 70 landowners and agriculture partners and leaders gathered on June 28 to celebrate the nation’s largest voluntary conservation program and witness the impact the program has at the local and state level.

Attendees visited three farms in Franklin County, each highlighting various resource concerns of the landowner and how they benefitted from the Farm Service Agency’s (FSA) conservation program. Jim Eckelkamp of Lyon, Missouri, was the first stop on the tour. Fields on a sloping hillside were enrolled in CRP in an effort to improve wildlife habitat with hope of bringing quail back to the property.

“I heard quail on the farm in both the spring and the fall for the first time in over 10 years,” Eckelkamp said.

Eckelkamp planted native grasses and forbs as well as implemented some edge feathering. He also used cost-share programs established by the Missouri Department of Conservation and Quail Forever to help accomplish his conservation goals.

The next stop on the tour was Kappelmann Century Farm near Rosebud, Missouri. Arvil Kappelmann, his wife Jean and their son, Doug, have dedicated nearly 30 years to making improvements on their farm for wildlife habitat. They utilized various CRP practices to help control erosion on the farm including installing riparian buffers along a creek and planting native warm-season grasses and forbs on hill fields. Additionally, they implemented quail buffers around their crop fields.

“The quality of life has been drastically improved by putting in the habitat that we have,” said Arvil. 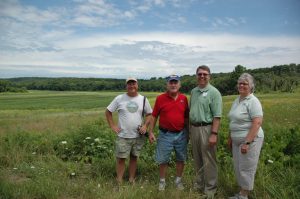 The Kappelmanns also used the Natural Resource Conservation Service (NRCS) Environmental Quality Incentive Program (EQIP) to help restore 30 acres of glades and woodlands on the property, as well as received some assistance from Missouri Department of Conservation and Quail Forever’s Habitat Challenge Grant. Their efforts appear to be paying off as they have noticed increased populations of deer, turkey, quail, rabbits and over 180 species of birds documented on the farm.

The final stop on the tour was Joseph and Theresa Long’s farm near New Haven, Missouri. The Longs used CRP to address various concerns on their property. Their farm sits along both Big and Little Berger Creeks and CRP riparian buffers have helped prevent stream banks from eroding. They implemented a pollinator habitat practice on an eroded ridge-top field that was considered poor for crop production. The Longs also completed a wetland restoration project in an area of the farm that was prone to flooding.

“The CRP has been great for these areas that have had issues with erosion or never were good production areas,” Joseph said.

The Longs take great pride in conserving and restoring the grassland on their property, including planting a diverse mix of native plants. One of their plantings included nearly 117 species of native plants.

“What makes home what it is?” said Pfaff. “It’s the soil. It’s the land. It’s why the investments are being made back – investments in the land.”

Since its creation on Dec. 23, 1985, CRP has helped prevent more than 9 billion tons of soil from eroding and protected more than 170,000 stream miles with riparian and grass buffers, more than 100,000 acres of bottomland hardwood trees, nearly 300,000 acres of flood-plain wetlands, and 250,000 acres each for duck nesting habitat and upland bird habitat.