Boots on the Ground for Ag 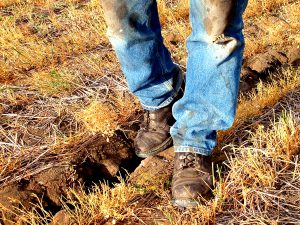 As military veterans approach their end of active service, they may wonder what their next steps will be. There are multiple options in addition to growing their hair out, going back to school, or getting a civilian job.

Thanks to the Farm Service Agency (FSA) of the U.S. Department of Agriculture (USDA), there is one option many military men and women should consider – operating their own farm. That’s what a couple of veterans discovered when plowing through opportunities and looking for a route to success.

James Oberg of East Grand Forks, Minnesota, spent nearly 25 years in the Air Force and retired in 2013. Michael Kelsay of Henry County, Missouri, has been a Marine since 2007. They each spoke with staff at their local FSA office and that’s when they heard about the Transition Incentives Program (TIP).

TIP was established by The Food, Conservation and Energy Act of 2008, also known as the 2008 Farm Bill. TIP is an offshoot of the Conservation Reserve Program (CRP), a voluntary program that contracts with agricultural producers to remove agricultural land from farming or ranching for 10- or 15-year periods.  The act authorized $25 million to transition land in expiring CRP contracts from a retired or retiring farmer to new or underserved farmers or ranchers, including military veterans.

The incoming producer then returns the land to sustainable grazing, resource conserving crop production or organic farming.  In exchange, the retiring farmer becomes eligible for up to two additional years of CRP payments.

After learning about TIP, Oberg began leasing land from his neighbor who has been in CRP for many years. Now in his second year in TIP, the former Air Force major is growing wheat, soybeans, corn and sugar beets.

“It’s a huge advantage for the veteran and the land owner,” said Oberg. “It’s mutually beneficial for both.”

“It’s a good deal for both the farmer and the landlord,” said Kelsay, a resident of Urich, Missouri. “It’s a guarantee for five years that you’ll have land to operate.”

Kelsay is entering his fourth year in the program. He is growing soybeans, corn and some winter wheat. Kelsay, who served in Iraq, said he’s happy with what TIP has done for him.

Today, 20 states have landowners enrolled in TIP, with more than 750 contracts on more than 120,000 acres. The top three states in TIP are Minnesota, Montana and North Dakota. Among the three, they make up nearly half of the total TIP acreage.

One of those landowners is also a veteran and loves the program, too.

Larry Moser of Colesburg, Iowa, was born in the house where he now resides and was raised on the farm.  He began serving in the Army in 1966. He has been a farm owner since 1978.

“It takes a lot of money to get started these days,” said Moser, now 68 years old. “You’ve got to have help to do it,” he said about the TIP.

Moser said it was his neighbor who told him about TIP. He said he’s had land in CRP for many years and just began renting the land to his neighbor this past fall through the program.

“I’ve known this guy since he was a little boy,” Moser said about his neighbor in a town with a population of 400. “It’s hard to get going and I like to see young guys get started farming.”

Moser acknowledged the average age of the American farmer is increasing. He said he knows the importance of getting new, young farmers out in the fields. Moser said young farmers didn’t have this as an option when he started.

“USDA really likes this program because it allows our agency to help beginning farmers or ranchers find land they can lease or buy,” said Jim Williams with FSA’s Conservation and Environmental Programs Division. “TIP gives an incentive to landowners to sell or provide a long-term lease to beginning farmers or underserved producers that they would not normally have.”

Oberg had advice for service members leaving active duty. “Look at all the government programs. There’s a ton out there for us. Do your research. It’s critical,” said Oberg.

“All military veterans have made sacrifices for their country,” said Deputy Undersecretary of Farm and Foreign Agricultural Services Lanon Baccam, an Army veteran overseeing USDA’s efforts to recruit military people for careers in agriculture. “We at USDA feel an obligation to do all we can to give back to our veterans, many of them from rural America, in recognition of the incredible value their experience can bring to farming and ranching.”

To learn more about TIP, visit www.fsa.usda.gov/conservation, or contact your local FSA county office. Contact information can be found by visiting http://offices.usda.gov.

For veterans interested in learning more about entering farming as a profession, visit www.usda.gov/newfarmers and www.fsa.usda.gov/veterans.