The McCalls Keep Ag ‘All in the Family’

Bruce and Jennifer McCall take pride in raising their sons on the farm and have used FSA programs and loans to expand their operation and recover from natural disasters such as drought.

A lot of American families “make it work” through hard times. One family in Arkansas has seen ups and downs on their family farm with droughts, floods and other property damages. Other families may quit, but this one seems to be ready for the long haul.

Bruce and Jennifer McCall bought their cow farm called “Bar M” in 1994 from Bruce’s mother after his father passed away. Raising cows was something Bruce was used to doing, growing up on that land. Now they’re raising their kids there stressing the importance of farming and accountability.

“We want to instill that sense of responsibility and pride in farming and not to think of it as just mom and dad’s farm that I have to help take care of,” said Jennifer who is serving her second year on the Farm Service Agency (FSA) County Committee. Her oldest son, Lance, joined the family business a few years ago after securing a youth loan and purchasing 10 cows for the farm. “We wanted him to think of [the farm] as ‘his.’ We wanted him to build and take care of his credit. He really learned a lot with the program.”

Lance, who recently graduated high school and moved out on his own, also works for a local gunsmith and his father works during the day as a welder. Even though the family has approximately 100 crossed-bred, Black Angus cows, they have other incomes to ensure they stay in business. Just raising cows isn’t enough to make ends meet, Jennifer said. 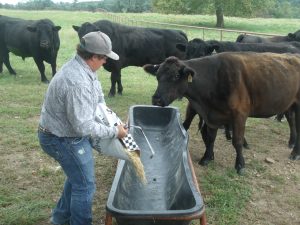 Lance joined the family business after adding 10 cows to the herd using an FSA youth loan.

The McCalls heard about the FSA’s programs from a family member and secured a loan when they were ready to expand. They got a loan and bought more cows to increase their herd.

“We were attracted to the low-interest rate and that’s when we learned about other programs,” Jennifer said. The family had experienced a drought, flood and property damage. The FSA had programs that helped their family through their dilemmas. “Some people don’t realize what FSA does.”

The McCalls also got help installing automatic water stop tanks for their cattle. Before FSA assisted them, the family was manually hauling water to their herd because their pond had dried up in the drought. “The last six to eight years have been really dry and challenging summers. That program helped us when we needed it,” Jennifer said.

Through ups and downs, the McCall family continued to stick together and succeed while teaching their children responsibility. Jennifer stressed that it was important for her kids to learn about working hard for what you have and like most farmers and ranchers, the McCall’s don’t want anything on a customer’s plate that they would not eat themselves.