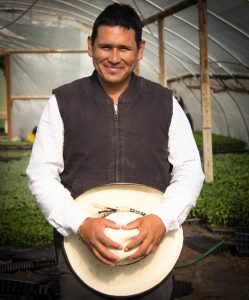 When some farmers talk about challenges experienced during their journey to success, they mention financial hardship or weather disasters. Once in a while, a farmer has a challenge that includes starting with a single acre of cropland and building it into a successful farm.

Ivan Tellez began working on a ranch in early 2000. After five years and as a Spanish speaker with only limited English, he moved to Nampa, Idaho, and began farming with his father. Tellez also worked for a local, fresh produce farmer with 25 years of experience.

In 2010 he had an opportunity to purchase an acre of tomato plants.  He raised them to full production, handpicked the tomatoes and sold them at a local farmer’s market. He saved his money and funded his own operation.

In 2012, he increased his acreage and planted jalapeno peppers. He marketed much of his hand-picked harvest through the farmer he had worked for previously. Tellez asked the farmer’s advice about getting a loan. Since commercial lenders weren’t able to assist Tellez as a beginning farmer, the seasoned farmer recommended he contact the local Farm Service Agency (FSA) office about a loan for beginning or underserved farmers.

Tellez visited the FSA Office in Caldwell, Idaho, and began working with Shawna Anderson, Farm Loan Officer. The language barrier was a challenge for both of them.  Tellez often took his cousin to the office to interpret. Today, the FSA offers Transperfect Translations, a service that connects farmers with limited English with an interpreter over the phone in the FSA office. There are at least 170 different languages available. A customer with Limited English Proficiency simply has to point out their language on an “Ispeak” card. The FSA employees follow instructions and within a few minutes, an interpreter is on the phone. Anderson also pursued Spanish lessons to better understand her new client.

Tellez Farms, LLC have been using FSA’s direct operating and term loans since 2012.  This year, Tellez qualified for a farm ownership loan and purchased farmland near Wilder, Idaho. A total of 71 acres is now in production. The younger Tellez actively markets his produce and reaps the benefits of the local demand for fresh, hand-picked fruits and vegetables. He is now selling produce to larger vendors in the area. 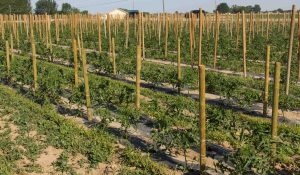 Tellez and his father grow an assortment of fruits and vegetables on 71 acres and market their produce to local vendors. (Photo credit – Kaylyn Franks)

Anderson said, “I am so proud of what Ivan has accomplished. To grow from one acre to 71 acres in six years is exciting. He is such a hard worker!”

Tellez has a vision “to keep growing and be an advocate for other Hispanic producers to help them understand they don’t have to be a migrant worker all their life.” When asked what motivated him, a huge smile covered his face as he said his obligation to his finances and his love for knowing he played a part in planting a small seed and raising it to full production were primary factors.

More information on Limited English Proficiency is available at http://www.lep.gov.