Posted on October 6, 2017 by cassiebable 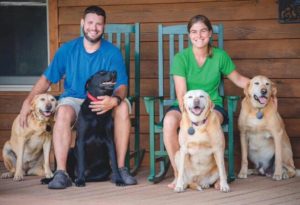 Aaron and Laura Briner live on their 24-acre farm, Laughing Lab Acres, located in Henderson County, Kentucky, where they raise Heritage livestock to be sold through farmer’s markets and by word of mouth.

The idea for Laughing Lab Acres was born out of a business plan Aaron created as a requirement for his college degree program. The operation is named for the Briner’s Labradors, Bindi, Bodie, Britt and Jake. After two years of working full time off the farm, Aaron quit his job in 2016 and became a full-time farmer.

“Without the Microloan obtained through USDA’s Farm Service Agency (FSA), we would not have been able to expand to the operation we have now,” said Aaron.

FSA’s Microloan Program meets the financial operating needs of new, niche, and small to mid-sized family farm operations. Through Microloans, farmers may borrow up to $50,000 using an abbreviated application process. This access to credit for non-traditional farm operations fit the needs of Laughing Lab Acres.

“We are still so new that we don’t have the production history traditional lenders want to see,” Aaron said. “The Microloan Program gives us the capital we need to operate on until we make our sales.” 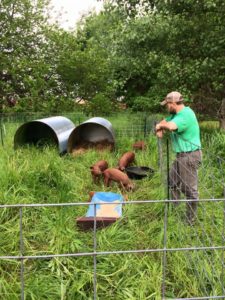 At Laughing Lab Acres, the Briners produce pasture-raised livestock consisting of chickens, turkeys and pigs. All of their livestock live as natural of a life as possible.  The entire infrastructure of Laughing Lab Acres is portable. The animals are moved from paddock to paddock every few days, with all fencing running on solar power.

“I’m still learning. You have to be able to wear so many hats as a farmer,” said Aaron. “It’s a continuous learning process and that’s what I like about it. We get to take part in the growth of our farm.”

Since opening their operation in 2014, Laughing Lab Acres has obtained a dedicated consumer base. Even area restaurants recognize their craftsmanship, featuring pork and poultry from the farm.  An expansion into vegetables is planned for the upcoming season.

“The ultimate goal is to be a one-stop-shop, or whole diet, provider,” Briner said.