Missouri Dairy Diversifies to Keep Next Generation on the Farm 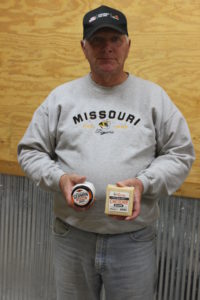 The Hemme family has been rooted in the dairy business in Saline County, Missouri, for the past 22 years. When David Hemme’s four sons approached him about coming back to the farm and being a part of the business, they started Hemme Brothers Creamery.

David Hemme of Sweet Springs, Missouri, scrolls down through a German webpage on his smartphone. The insignia of “Hemme Milch” anchors the top of the page, a company owned and operated by Hemme’s distant relatives in Germany.

The Hemme family has been rooted in the dairy business in Saline County, Missouri, for the past 22 years. When David’s four sons approached him about coming back to the farm and being a part of the business, they figured they had two choices. In order to support five families, the dairy was going to need to significantly expand its herd, or they could get creative.

Each of Hemme’s sons play a vital role in the operation, from the quality of the forage going into the cows, to the craftsmanship of the cheese being produced on their farm. Nathan is the cheese maker. Jon oversees the agronomy part of their operation, including the production of row crops on the farm. Michael is the herdsman of the dairy cattle and Aaron oversees animal nutrition. As for their dad, he took a step back from the day-to-day operation and took on a new role.

“I had a change in vocation,” Hemme said. “I became a salesman.”

The Hemme’s studied up on cheesemaking and with the help of a consultant, constructed their creamery and brought their vision to life.  “We decided we weren’t going to make an everyday cheese,” Hemme said. “It was going to be a specialty cheese.”

“The community is proud of Hemmes’ success and has enjoyed watching their family embark on this new phase of their farming operation,” said Jared Singer, county executive director for Saline County Farm Service Agency. “It’s great to see how they have leveraged the farm-to-table movement to allow the family to continue farming together.”

In August 2016, they made their first batch of cheese and immediately got their product in front of consumers at the Missouri Wine Tent at the Missouri State Fair. Hemme Brothers cheese can be found in stores across Missouri, as well as some large farmers markets in the state. 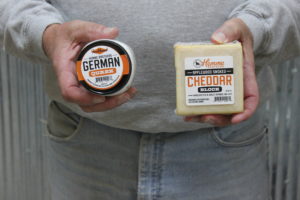 Quark and cheddar cheese produced by the Hemme Brothers Creamery.

David has also found a special niche selling his products in stores and wineries in Hermann, Missouri, a tourism destination rich in wine and German heritage. The Hemme’s own German heritage was inspiration for one of their signature products – German quark, a spreadable cheese akin to cream cheese.

“We wanted a unique cheese. We wanted something that gives identity to our community and where we’re from,” Hemme said.

After just one year of production, Hemme Brothers Creamery German Quark was awarded a first-place prize at the American Cheese Society Convention in the fresh, unripened cheese with cow’s milk category.

The Hemme’s have utilized a variety of USDA programs to assist in their dairy operation. They participate in the Farm Service Agency’s (FSA) Margin Protection Program for Dairy, a risk management tool for dairy producers when the difference between the all milk price and the average feed cost, or margin, falls below a certain dollar amount.

Additionally, the Hemme’s have utilized the Environmental Quality Incentives Program (EQIP) through USDA’s Natural Resources Conservation Service (NRCS) to help with waste management on the farm.

For more information on FSA programs, visit your local service center or www.fsa.usda.gov.