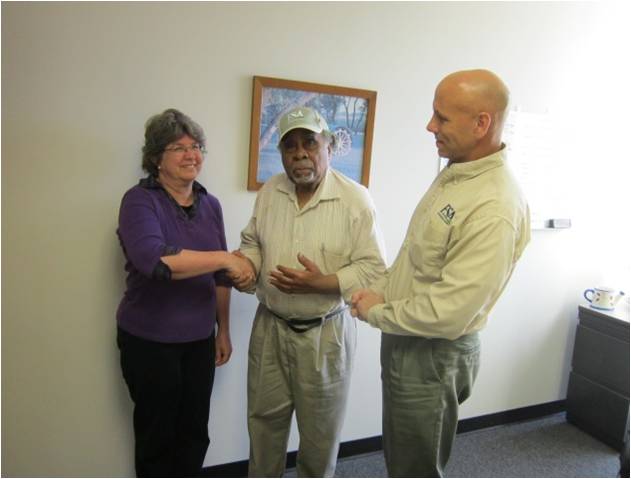 Malachi Duncan has farmed for six decades. Now, at age 92, he’s ready to do more.

“I was out on the tractor trying to locate a cow,” said Duncan, who farms 43-acres of his family’s land in Union, S.C.  It’s the same land he used to plow with mules before planting cotton, peanuts and corn.

“Now that was hard with long hours” said Duncan. “We didn’t have any tractors back then, but we farmed to survive.”

That has been the motto for his life. A life that has traveled the world, fought in a war, educated others and returned to a 21st Century farmland he once again calls home.

“This used to be a rural area with only three or four houses around,” said Duncan. “Now you can’t count the number of houses.”

Duncan left the farm During World War II to serve in the U.S. Army in Europe under the command of General George S. Patton. He made his way through France, Germany, Italy and Africa before returning to South Carolina to study economics and history at Benedict College in Columbia.

He went into the teaching profession and became a Baptist minister with Bethel African Methodist Episcopal church.

Today, Duncan is retired from teaching and ministering, and sits on his tractor in hunt for a stray cow. His son helps him with the day-to-day chores, but lately, Duncan has been searching for runaway cows and seeing several calves die off.

“I lost a lot of calves and I couldn’t figure out why,” said Duncan. “I found out it was because the mother wouldn’t allow them to suck. I tried the bottle, but they were too weak.” He currently operates with six cows that roam 40 acres of pastureland.

“He started farming over 60 years ago when farming as a minority in the Deep South was a tough business,” said John McComb, an FSA farm loan officer who assisted Duncan with a microloan.

Duncan said the microloan provided the small amount needed to buy a bush hog and fertilizer. “They were wonderful and courteous and explained everything I needed to know and what they expected of me,” said Duncan.

McComb said he is one of the newest farm loan customers, but “he has likely seen more changes to American agriculture than any of our existing customers.”

Duncan said he has seen more than just physical changes, but the way of life has changed. From the way people raise their children to the way people farm. “People aren’t as compassionate as they used to be,” said Duncan, who raised four children and has eight grandchildren and, as he puts it, “heaven only knows how many great-grandchildren.”

The advice he gives new farmers today? Education is key. “Farming is big business now. You have to understand it, expose yourself to it and be involved,” said Duncan. “Go into it because you love it. You will only get out of it what you put into it.”

This entry was posted in Features and tagged farm loans, farmers, FSA, microloans. Bookmark the permalink.

6 Responses to Still Farming at 92